(Left to Right) Prateek Sachan and Kushagra Srivastava of Chakr with their ink sample. Anirudh, Nikhil and Nitesh—co-founders of Graviky Labs

Not many of us look at pollution as a resource that can be harvested, but some young entrepreneurs are setting a trend. Close to one million people in India die prematurely each year due to air pollution, and the country is all set to overtake China in such deaths. While we all dread air pollution, two Indian startups have created a business opportunity by capturing it and using it as a raw material to create inks and paints. Chakr is one such startup based in Delhi. It captures soot from diesel generators to manufacture inks and paints. In Bengaluru, Graviky Labs has also developed ways to trap harmful soot and create ink out of it.

Chakr was founded by three engineers of the Indian Institute of Technology (IIT), Delhi: Arpit Dhupar, Prateek Sachan and Kushagra Srivastava. “The idea came to Arpit when he was having sugarcane juice at a roadside stall that used a crusher powered by a diesel engine. The exhaust of the crusher was facing a wall which had turned black. That was the initial building block,” says Srivastava, the 22-year-old chief executive officer of Chakr. What followed was continuous brainstorming for a couple of months, before Chakr Shield—a device that captures soot from the exhausts of diesel generators—was born. The company has already raised R2 crore from venture capitalists based in the US, Singapore and India.

Currently, over 30 such retrofit devices are in operation across the National Capital Region (NCR). Chakr claims to have captured over 180 kg of particulate matter (PM) and in the process purified 90 billion cubic metres (m3) of air (5,000 cubic metres of air in NCR has 1 g of PM). The company also manufactures inkjet printers and T-shirts from Poink—an ink made from captured soot. Each T-shirt, which uses ink converted from soot, prevents over 7,000 m3 of air from getting polluted. This is the amount of air an average person breathes in four years.

The company has found many clients, including BSNL, MTNL, Reliance Communications, the American Tower Corporation and a few real estate firms, especially for Chakr Shield. “We are also negotiating with the Delhi Metro and KFC to install these devices. Currently, we are focusing on B2B sales, but Poink will soon be available on e-commerce portals. Further diversification will depend on market’s response to the ink,” he says. 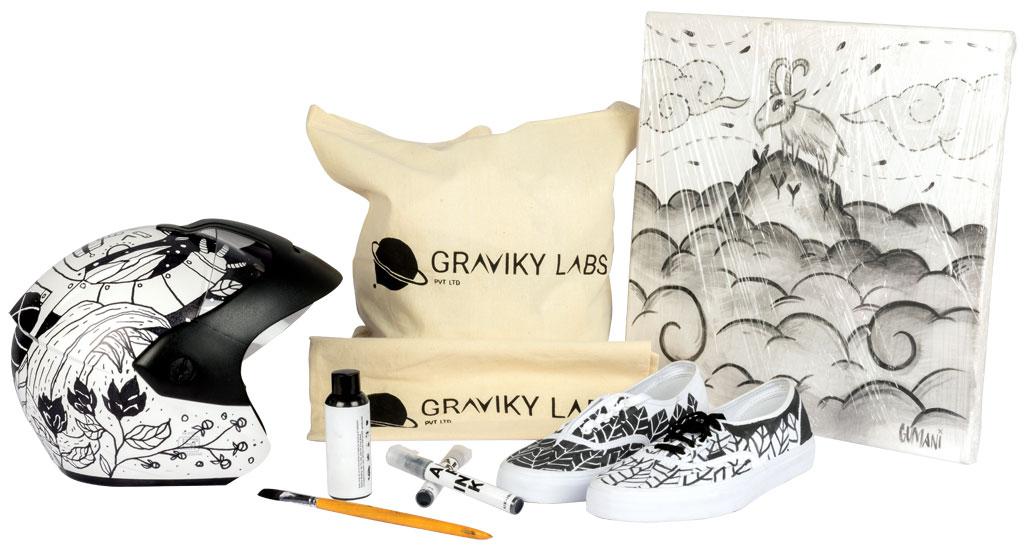 From pollution to pigment

Guided by the same environmental con-sciousness, Graviky Labs converts vehicular soot into a purified carbon-based pigment. The startup was founded by three passionate young men—Anirudh Sharma, a graduate from the Massachusetts Institute of Technology’s (MIT’s) Media Lab; Nikhil Kaushik, a chartered accountant, and Nitesh Kadyan, who holds a degree in computer science from the International Institute of Information Technology (IIIT), Bangalore. While Anirudh is the Chief Disruptor, Nitesh is the Hardware Lead of the company and Nikhil looks after business operations.

The idea of inventing a device that can trap soot germinated in Anirudh’s mind in 2013, during his stint at MIT, where he realised the potential of capturing emissions from engines and repurposing them to be used as ink. “We explored the possibility of using emissions as a pigment for colouring. Later, we tied up with several designers, artists, chemists and automobile experts,” says Kaushik. At Graviky Labs, the ink is created by a three-step process. “In the first stage, we use our proprietary technology Kaalink to capture the soot emitted from vehicles. This device is retrofitted to exhaust pipes of vehicles to trap the pollutants. In the second stage, the soot collected by Kaa-link goes through several chemical processes to remove heavy metals and carcinogens to produce a purified carbon pigment. In the third stage, the carbon pigment is used to make inks and paints. We have been experimenting with each stage for the last one year,” explains Kaushik. Their flagship product, Air-Ink, has already received appreciation from artists who consider it thicker and better than traditional ink. Unlike traditional carbon black inks, which are manufactured by deliberately burning fossil fuels, Air-Ink is manufactured by capturing carbon soot already produced by burning of fossil fuels by vehicles.

This year, the project was hosted on the website of Kickstarter—a US-based public-benefit corporation that helps artists, musicians, filmmakers, designers and other innovators find resources and support they need to realise their ideas—and it collected R19.3 lakh (three times the amount they intended to collect). “We just finished our Kickstarter campaign where we offered Air-Ink for sale for the first time. We will also sell it on our online store soon,” says Kaushik. Around 30 millilitres of ink can be made from 45 minutes of tailpipe pollution. In the last year alone, around 1,000 litres of ink has been produced.

Currently, Kaalink devices are deployed on a small scale in Bengaluru, mostly on private vehicles and generator sets. They capture 95 per cent of PM pollution without affecting vehicle’s engine performance. “We are talking to several logistics and generator companies for scaling up its use,” says Kaushik. The company is working on developing different types of inks and paints under the umbrella name, Air-Ink. The patent for this technology has been filed and is under review. Once this is done, details of testing and results would be made public. At a time when premature deaths due to worsening air quality are increasing, these young innovators are turning something harmful into something useful.