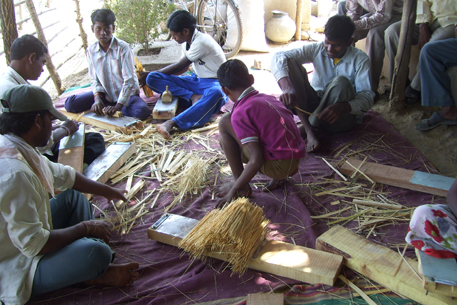 These days all 225 residents of a small village in Maharashtra, Pachgaon, are busy slicing bamboo to make sticks on which incense stick material can be stuck. “It is the only business that flourishes even during depression,” says Rekha Thamke, a resident of the village as she laughs. “More the depression more is the demand for incense sticks.”

The village has decided to mass-manufacture these sticks from the bamboo they harvest under Community Forest Rights (CFR) and have decided not to sell the bamboo to contractors. “Even if a person slices 10 kg of sticks a day (the average output is 15-20 kg a day per person), he or she can earn Rs 100. We have come to know there is a great demand for these sticks,” says Thamke. Villagers hope this will be a value-addition to their income and help them earn year-long wages.

But the only catch in this seemingly flawless plan is that Pachgaon has not been given CFR despite having applied for them in 2009. After years of hectic follow-up and repeated disappointments, the village has decided to go the Mendha Lekha way. “If we are not given CFR claims by April 13, 2012, each villager will fell one bamboo in the forest and then we will demand transit passes for transporting the bamboos,” says Pathru Tekam, another resident. The bamboo is spread over 994.74 hectares (ha) of forest.

No agriculture, no source of living 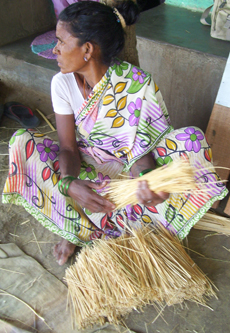 Pachgaon, located in Gondpipri tehsil of Chandrapur district in Maharashtra, is a tribal village with hardly any agricultural land. “About 50 per cent of the families have land, but most of the holdings are below 1 ha,” says Tekam. The land is rocky and unfit for cultivation. Most of it is lying fallow, he adds. The village has no independent source of earning a living.

“Our only source of income is wages from NREGA and trench and contour digging work of the forest department. Even for this work we have had to stage agitations,” says Thamke. Residents say before they started getting regular NREGA work in 2007, starvation was common. “Several months a year, we would dig tubers and roots in the forest for food,” reminisces a village elder Akdu Thamke. “Some of the tubers were so bitter that they had to be boiled and drained several times before they could be eaten. But the only option was to either see our children starve or migrate as construction labourers,” he adds.

Despite having a rich forest, the village is not able to get livelihood from it due to the forest department’s draconian rules. “Except for fuelwood, we have to steal everything. Leave alone bamboo, forest guards do not allow us to even collect mahua, chaar or amla,” says Thamke. The village has a joint forest management (JFM) committee, but it is dysfunctional.  We have been traditionally protecting our forest, but we have not derived any benefit from it, she adds.

When villagers learnt about Mendha Lekha’s CFR claim, they decided to apply for the same. But the process ran into trouble. All required documents except the nistaar patrak—document showing nistaar rights which allows people to take forest produce for their own consumption—were in the possession of the revenue office. “When officials objected to the incomplete application,” says Vijay Dethe of the non-profit Paryavaran Mitra, who facilitated the claim, “we asked them to provide the map and other missing documents, but they were not provided.”

However, villagers stuck to their guns and their application was accepted in December 17, 2009. But forest department turned down the claim saying that two other villages in the panchayat had nistaar rights to the same forest. Villagers replied immediately, saying that the nistaar rights of the two villages in question are limited to grazing, drinking water for cattle and wood for agriculture implements. “We submitted a copy of agreements upholding these rights, reached at a joint gram sabha meet and informed officials that the other villages are not objecting to our claim,” says Ramesh Tekam, a resident. Though this reply was submitted in early January 2010, the department, he says, has not replied till date.

When asked about the delay, district collector V D Waghmare says that the village has demanded “too much land”, and that they do not need CFR as they already have nistaar rights. When it was pointed out that villages like Mendha Lekha have received twice as much land under CFR as Pachgaon is demanding, he expressed ignorance and said he would study the situation and sort it out.

He added that the matter has been brought to his notice only 15 days back, but villagers point out that they first brought the issue to his attention on September 12, 2011, when a delegation met him personally and submitted a reminder. They were advised to apply for utility land under Forest Rights Act. “He said we could get land for a school, cremation ground or gymnasium, but not CFR,” says Tekam. Down To Earth has a copy of the said letter.

Villagers complain that with just six days to go for the April 13 deadline, the administration is still not taking the issue seriously. “Even at this late hour, the forest department has only recommended that the district level committee study the Gadchiroli CFR situation and then take action. When will the process be completed and the villages get its claim?” asks Tekam.