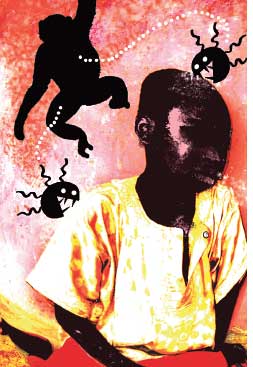 It is agriculture that brought malaria with it

if humans had not abandoned their nomadic ways for agriculture, two important events would be missing from the history of civilization: deforestation and domestication of animals. Man would also not have heard of diseases like aids and swine flu.

In 2007, the World Health Organization put down the number of people killed by the aids virus to two million. The virus is said to have shifted to humans from chimpanzees when forests were cleared. The swine flu pandemic exemplifies the names livestock added to the list of transitioning pathogens.

Chimpanzees harbour the parasite Plasmodium reichenowi --the closest known relative of P falciparum. Till date, studies have attributed the origin of the two parasites to the co-speciation theory. It says they evolved from a common ancestor and diverged with their hosts, ape and man, over the past five to seven million years. But the parasite's ability to be extremely infectious suggested that it invaded the human body recently. This led a team headed by Stephen M Rich, medical zoologist from the University of Massachusetts, usa, to investigate the parasite's origin.

"The logic is parasites seek not to damage their homes. Hence the ones which are pathogenic are only recently introduced to the host. In time the host acquires resistance," explained Rich.

The team sampled wild and wild-born captive chimpanzees from Cte d 'Ivoire and Cameroon and collected eight isolates of P reichenowi. When their dna was examined, the team found a gene (Csp) that encoded similar amino acid sequences for P reichenowi and P falciparum.

The team studied dna segments from three other amino acid coding genes in the eight isolates of P reichenowi and 133 isolated strains of P falciparum. "Two significant findings came to light. First, the genetic diversity of P reichenowi is much greater than P falciparum, indicating the chimp parasite existed long before the human parasite. Second, the dna comparisons confirm P falciparum is simply a branch of the more genetically diverse tree that is P reichenowi," said Brian Pike, director of laboratory science of the Global Viral Forecasting Initiative, usa, and author of the study. Published in the August 3 issue of the Proceedings of the National Academy of Sciences, the study disproves the co-speciation theory.

But what made it necessary for P reichenowi to evolve into P falciparum ?

Research shows all hominids, except humans, can produce a sugar from a glycoprotein found in cell membranes. P reichenowi has a preference for the sugar. In humans, the gene responsible for the conversion is deactivated. Hence P reichenowi mutated into a species that could take up the glycoprotein, abundant in human blood, to make hosts out of humans. The result was P falciparum. And since this parasite hardly has genetic diversity, it was a recent mutation. How recent, was the question.

Hunter-gatherers first transitioned to agriculture 10,000 years ago in Africa. Deforestation increased the number of human-wildlife conflicts. Pools of standing water for crops and a gradual warming created conditions favourable for mosquito breeding. Anthropological evidence shows it is around this time that humans developed haemoglobin mutants rendering them resistant to malaria. These facts coupled with the negligible genetic diversity of P falciparum establish that it entered humans 10,000 years ago, concluded the study.