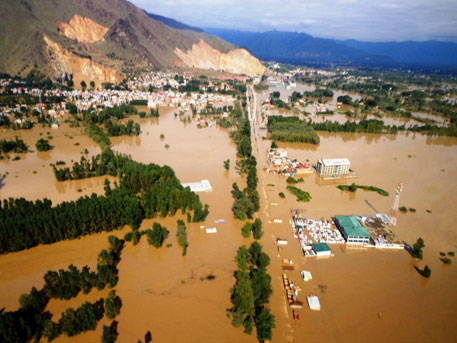 As floods washed away belongings of flood-affected people of Jammu and Kashmir, the Centre has intervened to ensure food availability to them. Union food and public distribution minister, Ram Vilas Paswan, has directed senior officials of Food Corporation of India (FCI) to camp at Srinagar and closely monitor the availability of food grains in the affected areas of the state. During a review meeting held by the ministry, officials were asked to ensure adequate and timely supply of food grains through food distribution system to the affected people.

According to the officials, there is sufficient stock of foodgrains that would last for about three months in Jammu region and about two months in the Kashmir division. So far there are reports of floodwaters affecting only one godown in Srinagar, having a storage capacity of 8,330 tonnes.

Paswan has directed secretary food and chairperson and managing director of FCI to monitor the situation on daily basis and take immediate steps to ensure timely availability and, if required, rush additional quantity of foodgrains to the affected region.

Standing crops like paddy and horticulture crops worth hundreds of crores of rupees have been damaged in Jammu and Kashmir in the floods. Earlier, in July, farmers had suffered huge losses due to untimely hailstorm, which had damaged paddy crop, vegetable fields and fruit orchards at Rafiabad, Laser, Saripara, Budden Tragpora and Rohama in Baramulla.

Jammu and Kashmir had been grappling with food crisis for long and the recent floods have aggravated the problem. According to the most recent pre-budget Economic Survey, Jammu and Kashmir is a food deficit state.

Percentage contribution of the state in agriculture and allied sectors had decreased to 19.41 per cent in 2011-12 as against 28.06 per cent in 2004-05. The survey warned that the state food shortage would grow as the population is projected to rise beyond 15 million by 2020. According to the survey, the annual foodgrain production hovers around 18 million tonnes against the requirement of about 24 million tonnes, leading to a shortage of 6 million tonnes (25 per cent).

Due to the recent floods, most of the standing crops are under water now. Once the water starts receding, state government would assess the damage suffered by farmers.