the controversial move by the Madhya Pradesh government to incinerate some waste from the the Union Carbide factory in Bhopal has met with stiff opposition. Civil society groups have strongly criticised the plan to take the waste to an incinerator in Gujarat.

They say the incinerator at Ankleshwar is badly equipped and the move will merely shift the health hazards and in no way help dispose the toxic chemical waste. Moreover, the move will rid Dow Chemicals--responsible for the waste's disposal--of the responsibility, say the groups. They moved the High Court of Madhya Pradesh against the plan, but the court declined to interfere into the matter.
The move comes under the directives of the high court. The court has ordered the state and the centre to jointly bear the cost of Rs 2 crore for the disposal.Of the 5,000 tonnes waste stored at a warehouse in the factory, 345 metric tonnes will reach Ankleshwar-based Bharuch Environ Infrastructure Limited (biel) in Gujarat for incineration. Another 40 tonnes will be disposed in a landfill in Pithampur in Indore. These are 6.9 and 0.8 per cent of the total waste.

The Bhopal Gas Tragedy Relief and Rehabilitation Department (bgtrrd) is awaiting clearance of the complete schedule of the disposal procedure from the high court. "In anticipation, all preparations to transport the toxic chemical waste have been started," says Ajit Kesri, bgtrd secretary.

The Madhya Pradesh Pollution Control Board (mppcb), part of the task force set up by the high court in 2005 to give technical expertise for the clean-up, has said it will not monitor the disposal. The Gujarat Pollution Control Board (gpcb) has backed it, maintaining that the site is fully equipped to handle the waste. "Having assessed the facilities of beil, we have approved their plan," says gpcb's regional officer at Bharuch. The chairman of mppcb, S P Gautam, agrees "The incinerator is of international standards and one of the best in the country regardless of what ngos say." mppcb, according to Gautam, will give its consent for transporting the toxic waste and also monitor the procedure once bgtrrd completes tenders for the transport vehicles.

In Ahmedabad, representatives of beil said the company runs a world-class waste treatment plant, which has adequate facilities for transport, storage and disposal of any kind of hazardous solid waste. Former Narmada development minister Jaynarayan Vyas backs beil, saying the Bhopal toxic waste can safely be managed at Ankleshwar without any harm to the local environment. "What we are bringing is solid waste and not any liquid. The waste has been lying there for over two decades and must have got diluted now. So it can be managed safely at Ankleshwar," he says.
Not everybody is buying this claim. Groups representing the survivors of the Bhopal tragedy and activists in Gujarat question the incinerator's ability to control pollution. They say incineration of the toxic waste will pollute the area the way Union Carbide did, triggering another tragedy. That a national company has undertaken the disposal goes against the 'polluter pays principle', they say.

Bhopal Group of Information and Action, an ngo, has filed a petition in the high court seeking a ban on the disposal. 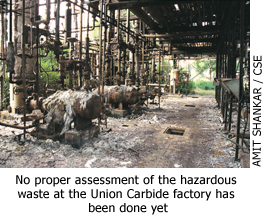 It has also submitted a report comparing the Treatment Storage Disposal Facility (tsdf) in biel and with the one in Biebesheim, Germany. The report was prepared by Eckart Schultes, hazardous waste management expert in Karnataka.

The report says the small facility at Ankleshwar can cause fluctuations in temperature, causing mercury emissions. Emissions of chemical pollutants and acidic gases at the facility are likely to be several times higher than what many internationally available incineration technologies generate; and land filling of dust and ashes from the incinerator without stabilisation can contaminate local environment with toxic heavy metals, salts and inorganic compounds. All these can cause long lasting health and environmental problems to 100,000 people in the area.

The waste, says the report, will be manually emptied and re-packaged in plastic bags. This involves high health and safety risks and the facility is inexperienced to handle this since it has been operational for only two years.

According to the report, the landfill at Pithampur is unsafely located on a hill and rainwater can get into it. It has inadequate monitoring of leachates. According to Satinath Sarangi of Sambhavna Trust, an advocacy group, a small amount of toxic material disposed inefficiently can cause environmental problems at both the sites.


In Gujarat, residents have organised protest rallies under Ankleshwar Bachao Samiti. Zia Pathan, a resident, says "We have warned the authorities. If the waste is brought here for disposal, we would launch an agitation," adding, "So far they have not said when they would bring the waste."

Environmentalist Rohit Prajapati says the Central Pollution Control Board (cpcb) in December 2006 asked gpcb to assess the facilities at the Ankleshwar plant, asking it to conduct an exhaustive study of the region's capacity for handling pollutants. "The Bharuch region of Gujarat has been under intense pressure due to the high air and water pollution potential on account of the large number of chemical industries...," cpcb said. However, gpcb secretary Sanjeev Tyagi says it needs time to carry out the directive since it has to arrange for the resources. This flies in the face of the board's claim that Bharuch can handle the waste.


ngos say there are alternatives. They have come up with a plan of action to deal with the issue (see box An alternative plan). Instead of taking toxic waste to Ankleshwar and Pithampur, the government should invest the fund to make provisions for stopping toxic wastes seeping into ground during monsoon, the activists say. They also demand Dow Chemicals take back the waste to the us, like Unilever did--by shipping the toxic waste it made in Kodaikanal. The waste can be safely disposed in the us, which has advanced technology. The company has not yet dealt with the total waste at the factory and no proper assessment of it has been done by any agency, they say. "Government organisations have caused delay and confusion. No attempt has been made to compare studies on other hazardous wastes with the Carbide factory waste," says Sarangi.