Warming Arctic is making winter worse for eastern US; ‘bomb cyclone’ on cards

The US is bracing for an intense storm, which is expected to blast the entire east coast with frigid winds, ice and snow on Thursday 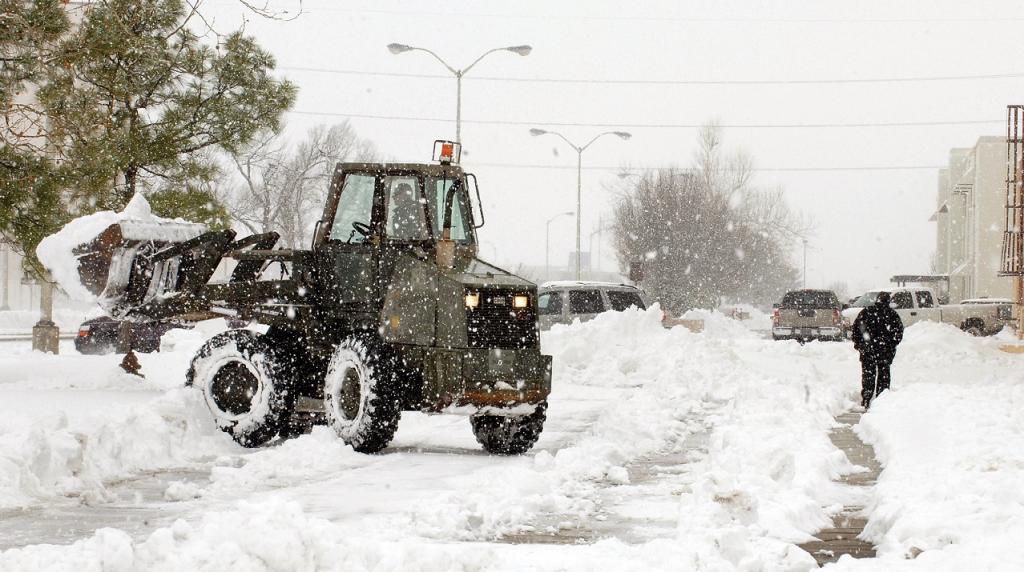 In recent years, intensity and frequency of cold waves in North America and Europe have been increasing. Credit: Tinker Air Force Base

Over the past two weeks, the eastern US and Canada have been in the grip of an intense cold wave. While it was the coldest start to a new year in America’s east in 70 years of record keeping, Canada saw record-breaking cold, too, as temperatures dropped below levels commonly seen in Antarctica and Mars! Even as North America struggles to cope with the biting cold, news has just come in that the winter is set to get a whole lot worse. The reason, for the starters, a massive storm dubbed the “bomb cyclone”.

The dip, up to 11 degree Celsius below average temperatures, has so far been attributable to warmer temperatures in the higher altitudes, specifically in and around Alaska. A ridge, or a northwards bulge in the jet stream, has set up across the American state and pushed temperatures much above normal. What this has meant is that the jet stream has actually surged southwards on the eastern side, towards eastern parts of the US and Canada. The Omega-shaped jet stream configuration is notorious for its longevity, something that North America has been witnessing this winter.

And now the continent is bracing for the storm—a winter equivalent of a hurricane—which is expected to blast the entire east coast of the US with frigid winds, ice and snow on Thursday (January 4). The explosiveness of the storm comes from the rapid drop in atmospheric pressure, which will likely unleash strong cyclonic winds, extreme precipitation and blizzard-like conditions on the east coast all the way from northern Florida to the state of Maine and some parts of mainland Canada and Atlantic Canada. Although the worst conditions are expected to be over the ocean, models have warned that this could be one of the worst extra-tropical storms the coast has ever seen.

While tropical cyclones are powered by warm air in the tropics and cause strong destructive winds close to the earth’s surface, extra-tropical cyclones have strongest winds higher up in the atmosphere.

Between Wednesday and Thursday, the storm will travel northwards along the coast and is expected to see explosive strengthening as atmospheric pressure drops by a massive 53 milibars in under 24 hours. According to experts, a drop of more than 24 milibars in a day could fuel strong icy winds touching 80 kmph on the coast.

Even though the storm is not expected to live beyond the weekend, milder weather might still be away if the storm manages to uncork the dreaded polar vortex—the main culprit behind intense winter activity in the northern hemisphere in recent decades.

The polar vortex is a large-scale low pressure system that helps in holding cold winds close to the poles. Studies have noted that weakening of the polar vortex due to a warming Arctic is likely to be responsible for cold air escaping the polar region. In recent years, intensity and frequency of cold waves in North America and Europe has been increasing. The increase has been linked to warming in the Arctic and decreasing sea ice extent, undermining the US President Donald Trump’s typically ignorant tweet calling for “good old global warming” to ease the situation.

The President might be forced to swallow his words as early as next week. The ‘bomb cyclone’ has now triggered fears of cold blasts from the Arctic powered by the polar vortex as its massive circulation and low pressure will help draw Arctic winds, which are slated to converge on the region by next week, prolonging the plight of the continent.