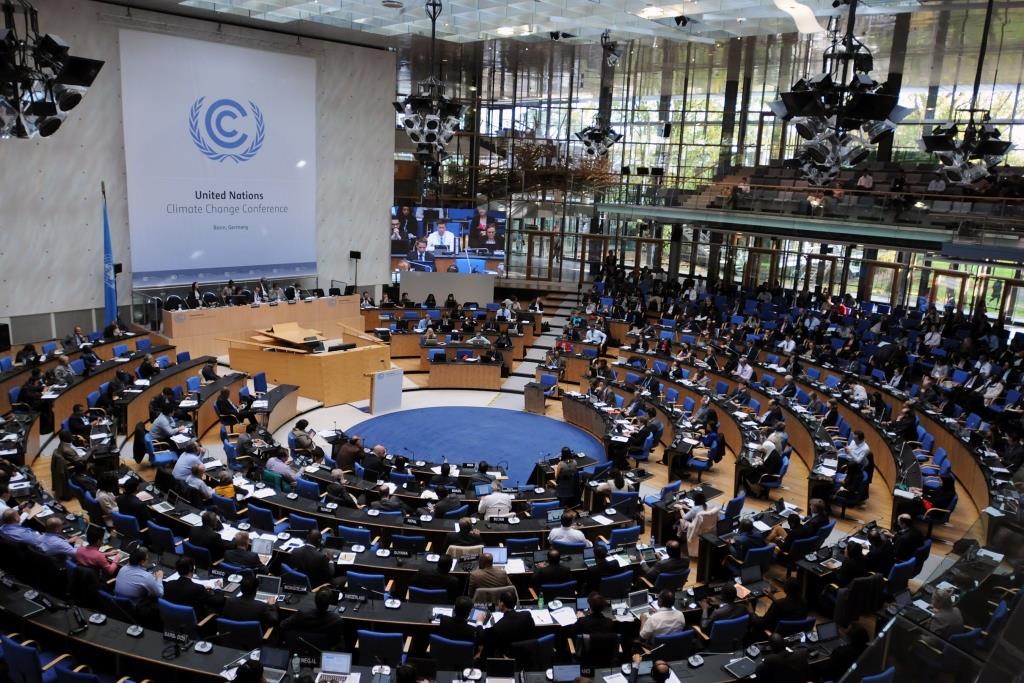 At the end of the five-day talks in Bonn, Germany, the proposals from all countries were compiled in a 55-page document. (Photo: IISD)

The five-day climate talks that just ended in Bonn, Germany, finally managed to restore a sense of balance in the draft text to the Paris climate deal by not excluding the voice of developing countries. At the end of the talks before negotiations in Paris, the proposals from all countries were compiled in a 55-page document. This will be the draft text that will form the basis of the negotiations in Paris from November 30 to December 11.

The earlier draft issued by the co-chairs of the Ad Hoc Working Group on the Durban Platform for Enhanced Action (ADP) was heavily tilted towards what the developed countries had been asking for. It had various issues such as the word equity being mentioned just once, very weak language on “differentiation” between developed and developing countries, being very mitigation-centric and just a passing mention of loss and damage, among others.

“While the effort of going through the text line-by-line and adding missing elements has brought with it a sense of ownership and balance, this has come at the cost of critical time meant for real negotiations. Much time has been lost in the process and this is going to make arriving at a Global Climate Change Agreement in Paris even more challenging,” said Chandra Bhushan, Deputy Director General at Delhi-based non-profit Centre for Science and Environment (CSE).

Some of the sticky issues critical to the outcome in Paris:

While the outcome of the Bonn session has been a balanced draft agreement that contains the demands of most parties, CSE believes there are a number of fundamental issues that still need to be resolved. The issues include:

Differentiation: there have been attempts to weaken this fundamental tenet of the UNFCCC with phrases such as “in light of different national circumstances” and “countries in a position to do so” being introduced in multiple places in the text.

Finance: It is estimated the climate finance of the order of at least US$ 100 billion will be required annually from 2020.  Developed countries do not want a clear financial roadmap of how this will be achieved and are hoping to deal with it outside the Paris agreement.

Loss and Damage: Rising frequency of extreme weather events across the world underscores the importance of having a mechanism to deal with losses related to lives and property.  But many developed countries do not want loss and damage to be part of the Paris agreement.

Civil society engagement: Based on an objection from Japan, civil society groups were barred from attending official negotiation sessions in Bonn. There was strong opposition to the move from most other countries who have demanded that it is not repeated in Paris.

CSE urges parties to keep the big picture of limiting global warming to under 2 degrees Celsius in mind at the final rounds of negotiations in December in Paris, and ensuring that countries, particularly the developed nations, do not exceed their entitled atmospheric carbon space. The world is left with just about 1,000 billion tonnes of CO2 that can be emitted and is currently consuming this space at the rate of about 50 billion tonnes per year.  At the current rate, the remaining carbon budget could be used up in just about 20 years.

“For the world to stay within the limited carbon budget, the developed world must make significant lifestyle changes and bring their consumption of resources down to sustainable levels. Consumers in rich countries waste as much food as is required by the whole of sub-Saharan Africa.  The US uses more electricity for air-conditioning than what is required by the continent of Africa, home to a billion people, for all purposes.  It is essential that the mitigation efforts of countries are distributed in an equitable manner and the global carbon budget is not exceeded,” said Sunita Narain, Director General, CSE.

“It is also essential that there is a clear roadmap on the means of implementation, or finance to support climate action in developing countries and that there is mechanism to deal with climate impacts and extreme weather events in the Paris agreement,” said Arjuna Srinidhi, Programme Manager, CSE.