Climate change in India: Either adapt or perish in Rajasthan 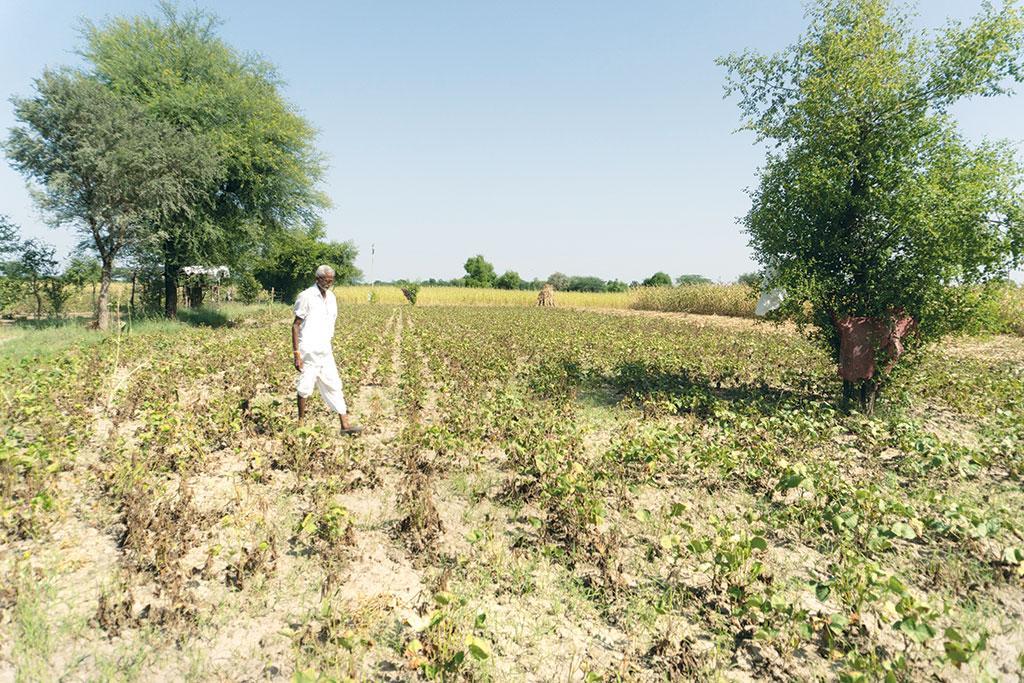 Mohan Lal, a farmer in Sodawas village, says last year, heavy floods destroyed his mung and this year, too, the crop failed due to no rains in the initial stage, and then untimely downpour. Credit: Ishan Kukreti

For the first time in nearly 50 years, Mohan Lal was determined to go against his traditional wisdom and grow mung (green gram) this kharif. So did several farmers in his village Sodawas in Pali district. Traditionally, the arid district along Thar desert received good rainfall once in every three years. Accordingly, say farmers, they would grow millets for three years and then mung or sesame for a year.

“But of late, Pali has been receiving heavy rainfall. Besides this year, the government hiked the minimum support price for kharif crops, and we wanted to cash in on these,” says Lal, who grew mung on 2 ha. But a sudden spell of unexpected rain in the last week of September played spoilsport for the crop, which would have been harvested in about a week. “My entire crop has turned black,” says Lal, adding that last year, too, heavy floods damaged his standing mung crop.

“Over the past three years, the amount of rainfall has almost doubled in the region. Earlier, the annual average used to be around 400 millimetres (mm),” says Deepak Gupta, scientist at the Jodhpur-based Central Arid Zone Research Institute. Due to heavy downpour, Pali and Jalore witnessed massive floods last year. To tackle such unprecedented events, Pali’s disaster management department for the first time acquired boats and life jackets. The state government is also looking for trained swimmers for joining its relief force.

Increased rainfall has also given rise to pest infestation. “Some pests like whitefly, which did not pose any major threat to crops earlier, is now causing excessive damage. The instances of wilt infection in cumin and chickpea; and powdery mildew, a fungal disease among mustard, have also gone up. In fact, we have been observing a rise in these diseases over the past four to five years. The population of aphids, small sap-sucking insects, is also increasing,” says Singh. Rabi crops like wheat fare no better. Their sowing is now a delayed affair as temperatures of western Rajasthan continue to remain high even after the end of August. A warmer climate makes crops prone to spotted bug infestation.

Dheeraj Singh, scientist at the Krishi Vigyan Kendra in Pali, says currently, the region gets more rainfall spread over a lesser number of days. “Since the region’s soil type does not allow easy percolation, heavy rains lead to waterlogging in the fields and do more harm than good to the crops.”

Gupta says the impact of changing climate is evident on the region’s vegetation. In the past 15 years, when the rainfall pattern has become highly unpredictable, rohida (Tecomella undulata) and khejri (Prosopis cineraria) trees have started flowering earlier—almost by a month. From millets to cash crops

Troubled by unpredictability of weather, farmers are turning to horticulture crops that can be sustained through techniques like drip irrigation. “Pomegranate is one such crop that has piqued the interest of many farmers in western Rajasthan in the past six to seven years,” says Ramavtar Chaudhary, deputy director, horticulture department in Pali. Data with the agriculture department shows area under the crop in Pali has increased by 78 per cent from just 15 ha in 2011. “The profit margin is huge,” says Moredhwaj Singh, Pali coordinator of Saini Agri Consultancy Services in Jaipur, which provides technical knowhow to interested farmers. A farmer can earn up to Rs 8 lakh from a hectare of the crop, he says.

There is a downside to the success story. This new wonder crop is being mostly taken up by affluent farmers. “Growing pomegranate involves a long-term invest ment of Rs 4-5 lakh per ha. The saplings are expensive and farmers need to set up drip irrigation system. The saplings take at least three years to mature and yield. I don’t have that kind of money,” says Bhola Ram, a farmer from Sodawas.

As part of coping mechanism, small farmers are turning to livestock rearing. “As per preliminary observation, we have witnessed an increase in cattle population,” says Hari Singh, animal husbandry officer of Pali. Warns Gupta: Too much dependence on livestock can create problems in a region where soil organic carbon content is low. In case of prolonged dry spells, overgrazing can further decrease soil productivity.

(This is the third article in an ongoing series on climate change in India. Read the first here and second article here).