Climate change in India: Odisha all set to redraw its map 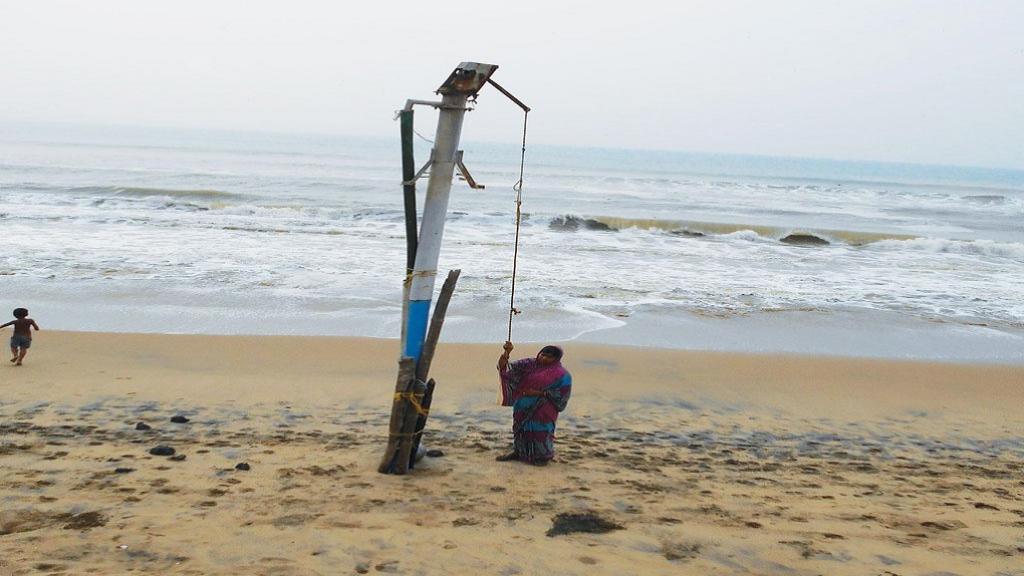 A Satabhaya resident says the Bay of Bengal has swallowed up 10 tube wells in their village in the past two decades. (Credit: Ashis Senapati)

This 6-metre-tall hand pump is testimony to the growing wrath of the sea,” says Pramila Behera, a resident of Satabhaya village in Odisha’s Kendrapara district, pointing to a bizarre structure. In the past one year, the Bay of Bengal has washed away chunks of land from the coastal village and now the pump’s water cylinder, which remains below the ground, stands exposed on the beach. The village residents have tied a rope to its handle to pump and attached a pipe at its mouth to collect water. “The sea has swallowed up 10 other hand pumps over the past 20 years. This one, when installed 18 years ago, was well in the middle of the village. Today, it is too close to the sea and is likely to be gobbled up in a few months,” she says, adding that this is the last source of drinking water in the village. “The village’s 12 km-long beach is the fastest eroding in the state,” says Subhendra Kumar Nayak, chief general manager of the Odisha State Disaster Mitigation Authority (OSDMA).

In fact, the entire gram panchayat of Satabhaya, literally seven brothers, may soon become a thing of the past. It originally consisted of seven villages. Now, only Satabhaya and Kanhupur remain. Five others—Gobindapur, Mohanpur, Kharik ula, Chintamanipur and Badagahiramatha —have been devoured by the Bay of Bengal since a massive cyclone hit Odisha in 1971, killing over 1,000 people. “More than 600 houses and 2,400 hectares (ha) of agricultural land have gone under the sea in the past 48 years,” says Maguni Raut, revenue inspector of the region. Once boasting of lush paddy fields and coconut trees, the two surviving villages are now ghosts of their former selves where half-buried, decaying tree stumps greet the eye.

The first major instance of sea erosion occurred here some 30 years ago when the winter palace of Shivendra Narayan Bhan jadeo, scion of the royal family of Rajkanika, ended up in the sea. The 110-year-old Panchubarahi Upper Primary School in Satabhaya met the same fate in 2012, prompting the district authorities to build a thatched house as a substitute the next year. In 2015, that too, was washed away. This prompted the government to establish in 2016 the state’s first resettlement project for sea erosion-affected people in Bagapatia village, 12 km from Satabhaya.

Till April this year, 577 of the 650 families in the village had been shifted to the resettlement colony. The district admini stration has also shifted all the five village deities from the 400-year-old Panchubarahi temple to a newly built accommodation in the resettlement colony and has built a school. But people say they now face newer challenges. “So far, my daily routine has been to catch fish and crabs in the creeks of Satabhaya,” says Malati Mandal, a fisher man who shifted to the rehabilitation colony early this year. “Now, every day I walk all the way to those creeks of Satabhaya to eke out a living.”

But more worried are those who have been left out by the rehabilitation project. Unofficial estimates show some 75 families still live in Satabhaya under constant shadow of death. “The district administra tion denied us rehabilitation, saying they have allotted the standard 10-decimal (404.6 sq metres) plot and given the Rs 2 lakh compensation to my father-in-law,” alleges Manorama Behera. “But we live separately and my husband should be rehabilitated separately. Now we are stranded in Satabhaya without neighbours and relatives.” District Collector Dasarathi Satpathy says the problem has crept in because the rehabilitation was done based on the Census 2011. The government is trying its best to provide lands to all the affected families.

Till then, relocation within the village has become the safest way to escape the fury of the sea. “Every night, the constant roaring of the sea strikes fear into my heart,” says Mahesh Sahani of Kanhupur village. He has shifted his house five times in the past three decades and yet lives barely 3 km from it. People who have traditionally depended on paddy farming, have switched over to fishing or shrimp cultivation after saline water rendered agriculture lands infertile.

Grazing fields are also turning saline. “Our village has lost over 6 ha of pasture,” says Rasmita Sahani, sarpanch of Satabhaya. “People here have been known for making money by selling milk, cheese and curd. In fact, till two years ago, the residents used to get sufficient milk from around 400 cows and buffaloes. Now, we have only 100 milch animals left,” she says, sitting in her residence-cum-office at Bagapatia rehabilitation colony.

Efforts to beef up coastline

So far, Odisha has lost 153.8 km, or 28 per cent, of its coastline due to coastal erosion, shows a study by the National Centre for Coastal Research, released in July 2018 (see ‘Climate assault’ on p60). This has dealt a massive blow to the state government’s plan to promote beach tourism. The beaches at Satabhaya, Pentha, Agaranasi, Hukitola, Eakakula, Madali, Habalikothi and Puri are losing charm as tourist spots. Disappearing and shrinking beaches at several other coasts are causing loss of work for fishing communities.

“Transition is imminent everywhere. Rising sea level coupled with change in wind patterns are causing high tidal waves and inundating coasts for a longer period of time,” says Ananta Kumar Sahoo, senior ecologist working on the World Bank- sponsored Integrated Coastal Zone Mana gement Project launched in 2010 to build national coastal management capacity. As part of the programme, Garware Technical Fibres Ltd in Pune constructed a 505-metre long geosynthetic wall two years ago at a cost of Rs 32 crore to protect Pentha village in Kendrapara from tidal waves, cyclones and tsunami. “This is the state’s first such experiment. Its success will pave the way for other such projects in erosion-prone areas,” Sahoo says.

(This is the first article in an ongoing series on climate change in India. Read the second here and third article here).