The Kumutiya river floods every year, destroying crops and houses. The river has shifted 3 km since 1960, and an entire village has had to shift with it 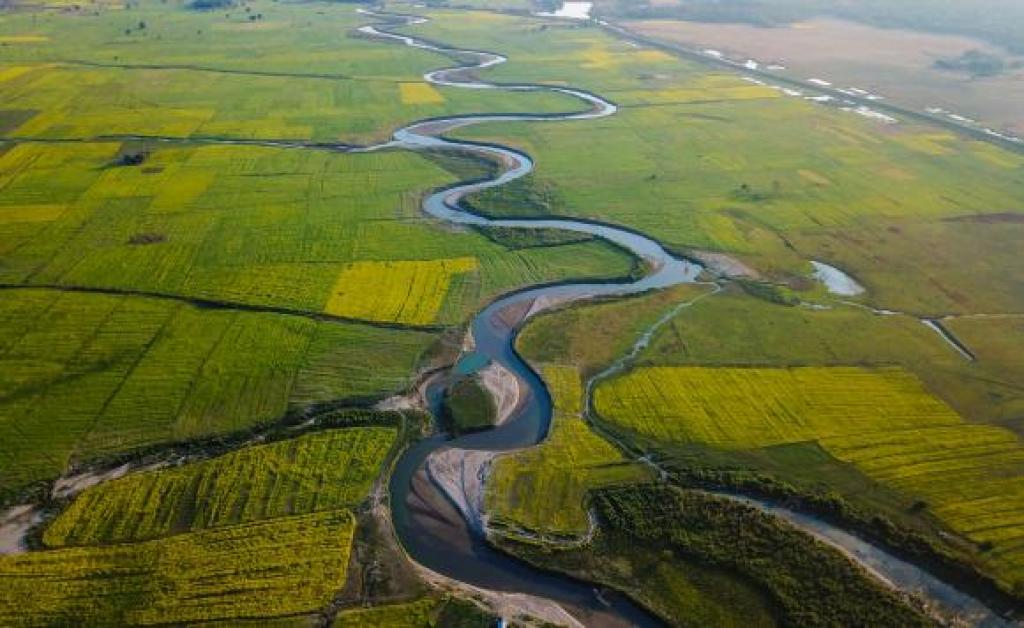 As North East India grapples with devastating impacts of climate change — change in rainfall pattern being the primary cause of concern — Assam’s Dhamaji district has another pressing worry: The shifting of Dihiri village where Kumutiya river has been rapidly and frequently changing course.

Flooding of the Brahamputra has shaped the land in most of North East India for millions of years. Major floods in the Brahmaputra are known to cause inundation for several days.

Jarman Doley (53) has had to leave his house every time there is a monsoon flood.

“It has been like this since 2007, when the embankment upstream in the river breached for the first time during a massive flood,” Doley, a resident of Mas Dihiri settlement of Dihiri village in Assam’s Dhemaji district, told Down to Earth.

He stood in the middle of a sandy river bed where his house was eight years ago. He belongs to the Mising tribal community. Dihiri village has two other settlements that is home to Mising people.

Mas Dihiri gets flooded by the nearby Kumutiya river which is one stream of the Jiadhal-Kumutiya river system. Kumutiya and Jiadhal are both tributaries of the Brahmaputra.

“Apart from the regular flooding every year, more ferocious floods destroy our crop every four to five years,” Doley added. During the 2020 monsoon season, the Kumutiya river destroyed rice fields. Doley lost two hectares of rice crop. The rest of the village comprising 54 houses lost around 38 hectare of the crop.

Dihiri village was once known as the granary of Dhemaji, but not anymore, said Doley. The villagers had to grow mustard and vegetables in the post-monsoon season to make up for the losses.

Doley also resorted to growing black lentils, but could not do it for long as the flood water stayed back much longer. The people of Mas Dihiri also rear pigs and goats. This form of livelihood is also affected by floods.

So now the villagers have learnt to live with the moody Kumutiya river. The river changes its course and shifts almost every year, some years by a few metres, other by many more.

Since 1960, the Kumutiya river has shifted by more than three kilometres and the entire village has had to shift with it. In 2009 alone, the village had to shift by around 400 metres towards the north of the river.

Traditionally the community has used bamboo stilts to raise their houses above the ground to save themselves from the flooding. Now this traditional method cannot be used because of the frequent shifting that they need to carry out.

“Boats are difficult to find during floods, and we need to build bamboo rafts,” said 30-year-old Hunmuri Doley.

The villagers took up the issue with the government authorities, especially the state’s water resources department, but the response has been mostly lacklustre. “During the September 17, 2020 floods, the state disaster response force teams even denied help to the flood-affected people,” said Jarman Doley.

Villagers said in the last few years, the changes to the river’s course have become more frequent and unpredictable. Rajiv Doley, another resident of Mas Dihiri, said the most severe flooding event of September 17 was unexpected.

He claimed rainfall has been increasing in the upstream of the river in the last 10 years: “Our village gets flooded in the following two to three hours. Earlier, pre- monsoon and monsoon rainfall period would happen from April to the end of the August. But it now extends well into September. The rains have brought in more silt from the mountains, the deposition of which is causing the shifting of the river.”

Rajiv Doley wants to get into pisciculture, but is uncertain about the future. Further changes in rainfall patterns, especially more extreme rainfall events in the upstream of the river, may further push the people of Mas Dihiri to the brink of economic and environmental collapse.