India is on track to meet its headline Paris target of reducing the emissions intensity of its Gross Domestic Product (GDP) by 33-35 per cent over 2005 levels by 2030. While it is well on track to meet its second commitment to increase the share of renewables in its power generation capacity to 40 per cent by 2030, it will most likely not hit its interim target of installing 175 GW of non-hydro-renewables by 2022.

The country is also off track in meeting its third target of increasing India’s carbon sink by 2.5-3 billion tonnes by 2030 compared to 2005. Nevertheless, it is among the top six countries in the G20 in the progress it is making towards its targets, as authoritative sources such the United Nations Environmental Programme’s recently-released Emissions Gap Report has confirmed.

That much is not in question, whatever Union Minister for Environment, Forest and Climate Change, Prakash Javadekar might have said in Madrid. His claim that the emissions intensity of India’s GDP had reduced by 21 per cent between 2005 and 2014 is also from an official source — India’s Second Biennial Update Report submitted to the United Nations Framework Convention on Climate Change (UNFCCC) in fulfilment of India’s international obligations.

Besides the larger question of the detailed analysis which more frequent data reporting could enable, we face a more immediate problem in India’s case. Official emissions data is not publicly available for 2005, the crucial baseline year of India’s Paris targets.

While the claim of 21 per cent reduction in emission intensity between 2005 and 2014 is made six times in the Second Biennial Update, every mention is in the format of a sentence, and no mention is made of the actual 2005 emissions figures or the GDP data series used to estimate emissions intensity.

We may compare this figure from figures estimated using two other sources. One is the GHG Platform India (GHGPI), a collaborative civil society initiative whose partners include the Mexico-based International Maize and Wheat Improvement Centre (CIMYYT) and the Indian arm of Washington (DC) based World Resources Institute. India’s Second Biennial Report has a section on the GHGPI, lauding its efforts in “independent estimation and analysis”.

The other source is the Emissions Database for Global Atmospheric Research (EDGAR), managed by the European Commission’s Joint Research Centre, whose data is regularly used by authoritative publications, including the Emissions Gap Report. Both these sources makes their own estimates of emissions intensity of GDP; we may also standardise this figure by using World Bank data for GDP (in constant 2010 US dollars).

In contrast to the 21 per cent figure mentioned in India’s Biennial Update Report, none of the figures mentioned in (or estimated using) independent sources even exceeds 14 per cent (see Reduction in the emission intensity of India’s GDP as per various sources). 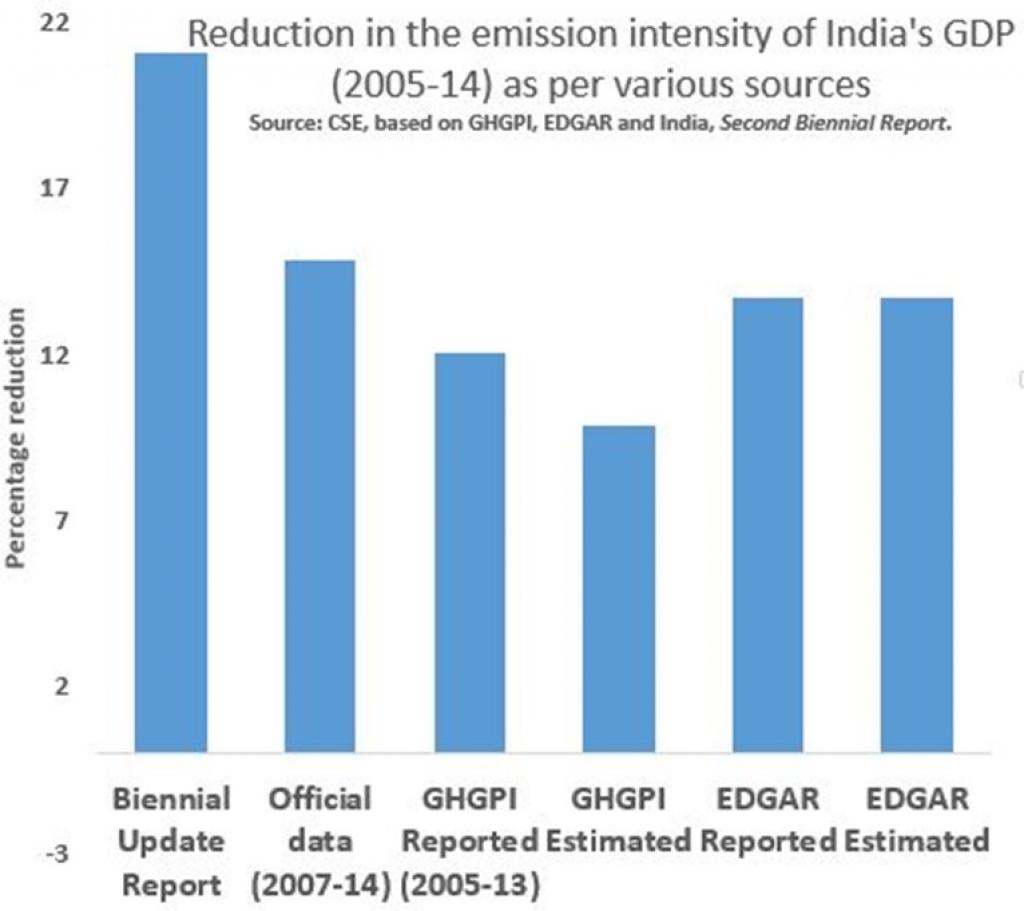 The discrepancy may well be down to differences in methodology and GDP data series. It is unknown which specific data series the 21 per cent claim relies on; while back-series estimates of past GDP figures based on India’s new, much critiqued methodology have been released, they are not available on the website of the releasing agency, the Union Ministry of Statistics and Programme Implementation.

India is a world leader on climate action. In order for that position not to be challenged, it needs to clarify the methodology used to estimate the 21 per cent figure. While the problem of infrequent data releases will ease in the future as a result of India’s new biennial reporting commitments, any independent appraisal of India’s progress towards its climate targets will require a public release of the full 2005 baseline data.

A more generous broader release of all official data for all years as spreadsheets or comma separated value files will enable much high quality policy-relevant analysis of India’s road to sustainability.