Delhi recorded its highest rainfall in 10 years for January 2020; There were 354 heavy rainfall events across India in March, April 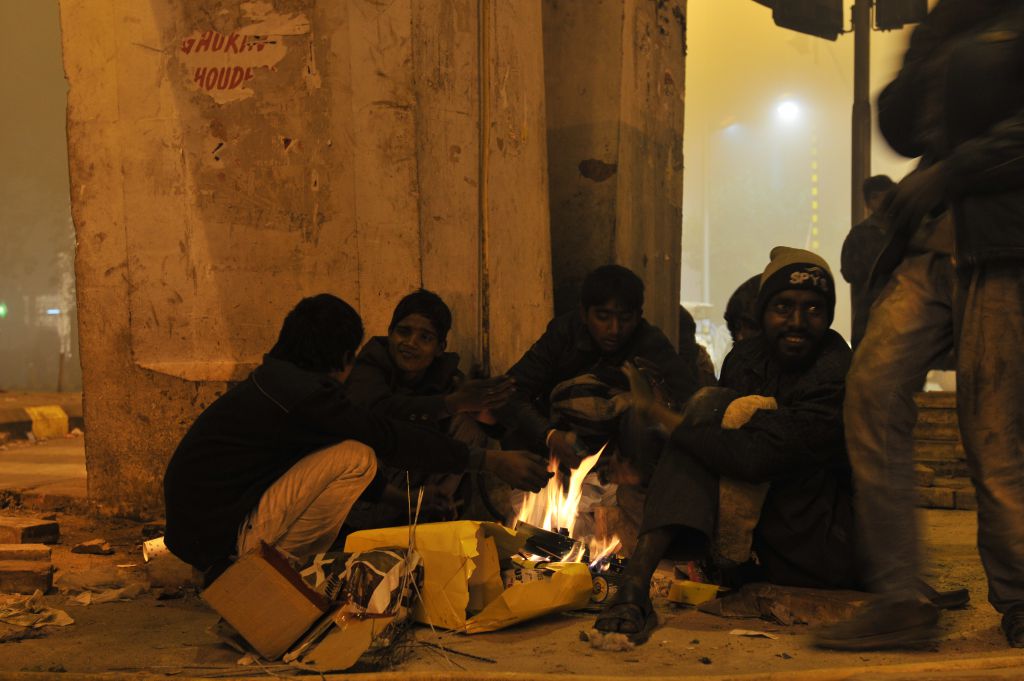 Most of north India reeled under a cold wave in 2019-2020 winters, despite IMD prediction of a warmer winter.

This is the first in a two-part series of how climate crisis affected India. Watch out this space for more.

This year in India, West Bengal experienced devastating floods on the account of Cyclone Amphan; northern India reeled under a cold wave and North East under heavy spells of rain; and locusts spelled doom for crops in north India. And there was more — in addition to the novel coronavirus disease (COVID-19) pandemic that only made rescue and rehabilitation process challenging.

The impact of extreme weather in 2020 has not left India untouched. The country has had its share of extreme and erratic rainfall, floods, droughts, cold waves, cyclones and thunderstorms accompanied by lightning strikes throughout the year. Here is a timeline of the extreme weather events that rocked India in 2020:

The record-breaking cold wave conditions of December 2019 continued into January 2020, but with the extra twist of rainfall throughout northern India.

Delhi recorded its highest rainfall in 10 years for January after a rainy December. Ladakh and Kashmir saw extensive snowfall. This led to plunging minimum temperatures in these regions along with Punjab, Haryana and western Uttar Pradesh.

But this was after the India Meteorological Department (IMD) had stated in November that the winter season of 2019-20 would be warmer than normal. One reason for the cold winter was the global weather phenomena known as the North Atlantic Oscillation (NAO) and the Siberian High.

“This was because of the absence of a major western disturbance for 15 days, fixed wind pattern at lower levels and the resultant severe cold spell. All of these are linked,” said Rajendra Kumar Jenamani, scientist at the IMD.

“Factors such as pollution across the Indo-Gangetic Plain also played a role as it favoured large-scale fog / low clouds over a period of two weeks,” he added. NAO is an irregular fluctuation of atmospheric pressure over the North Atlantic Ocean that has a strong effect on winter weather in Europe, Greenland, northeastern North America, North Africa and northern Asia.

Even after the cold abated in February, the unusual and erratic rains picked up in March when the pandemic was spreading across the world, forcing countries to go under lockdowns.

Between March 1 and March 5, 2020, 222 out of the total 683 meteorological districts in the country received large excess rainfall, according to IMD data.

Large excess rainfall happens when the rainfall in a particular district is 60 per cent more than normal for that time of the year, according to the IMD. In contrast, 265 districts received no rains at all, showing that a large proportion of the country either received too much rainfall or no rainfall. The situation was the worst in Uttar Pradesh, Madhya Pradesh, Delhi, Karnataka and the north eastern states.

The country recorded 77 per cent more rain than normal between March 1 and March 19, 2020, according to India Meteorological Department data. There was large excess rainfall recorded in 381 districts, 57 per cent of all districts in India.

In just two weeks, 159 more districts across the country received large excess rainfall. This included Uttar Pradesh, Bihar, Jharkhand, Delhi, Chhattisgarh, Punjab, Uttarakhand, Haryana. Bihar and Jharkhand received nine and eight times their normal quota of rainfall in the period. The number of large excess districts increased to 403 by end of March. Districts in Rajasthan, Himachal Pradesh and Odisha also got added to the list.

Experts attributed global warming as the reason for the intense rainfall. “Climate change is warming the atmosphere that can hold more water vapour now. So it is like a sponge getting soaked. Convection is like pressing the soaked sponge; water erupts out of one or two specific locations instead of drizzling uniformly. This is why we get extreme rains,” said Raghu Murtugudde, a climate scientist at the University of Maryland.

“Climate change is also warming the land. The Indian Ocean is like a bathtub with water getting warmer. This supplies huge amounts of moisture to land and creates widespread floods,” Murtugudde said.

The excess of the north, north-west and central regions was starkly contrasted by next to no rain in the north eastern states of Arunachal Pradesh, Manipur, Mizoram, Assam, Nagaland and Tripura which meant that they were reeling under drought like conditions.

The rainfall deficit in Mizoram was as high as 99 per cent till March 19. Tripura too received 84 per cent less rains than normal in the period. The southern part of India did not fare much better with Tamil Nadu having deficit in rainfall of 87 per cent and absolutely no rain in Goa along with the Union rerritories Puducherry, Daman and Diu and Dadra and Nagar Haveli.

In early April, the IMD issued a warning that the summer temperatures across the country would be warmer than normal, especially in the central, western, north western and some southern regions. This happened along with warming of the equatorial Pacific Ocean that brought in an El Nino scare for a while.

The warming phase of the El Nino Southern Oscillation sometimes brings warmer temperatures to India, especially during the summer season. But IMD’s prediction was proved wrong by the unusual rains continuing from March into April and May, accompanied by thunderstorms and lightning strikes.

There were 354 heavy rainfall events — defined by IMD as absolute rainfall above 64.5 millimetres (mm) — across India in March and April. Of these events, 224 occurred in April, while 130 occurred in March, according to an analysis by Down To Earth and Colombo-based research institute International Water Management Institute (IWMI).

Jammu and Kashmir and Ladakh were impacted the most (52 occurrences), followed by West Bengal (41) and Odisha (40), while Meghalaya recorded 29 such events in two months.

The heavy rain and storms led to cooler-than-normal temperatures across north, central and east India. The maximum temperatures recorded by IMD were below normal in large parts of north, east, central and southern parts of the country on May 11.

Temperatures were lower by four-seven degrees Celsius (°C), in parts of Uttar Pradesh, Bihar and Jharkhand. “Warming of land surface in the summer, especially in the northern part of the country, is essential for attracting monsoon winds that occur due to temperature contrasts between land and ocean,” said Murtugudde.

The rains also exacerbated the locust attacks in the northern states and brought them to new regions such as Madhya Pradesh that had not seen the pests in decades also showing new impacts of unusual rainfall in a warming world.

“In general, they (western disturbances) would bring dust storms, but in this case, they probably brought enough moisture. So, when they met warm air over western India, they produced thunderstorms and rain,” he added.

It was difficult for the IMD to foresee these western disturbances as they are often difficult to predict. Moisture is carried in the upper atmosphere unlike tropical storms that pick up moisture from the surface, said Murtugudde.

The western disturbance can only be tracked and predicted well around a day in advance, as they are cyclonic systems riding on the sub-tropical jet stream, according to him.

The IMD usually does well in predicting weather phenomena that have larger scales, like high temperatures and heat waves, rather than smaller phenomena like storms that bring hail, dust and lightning that occurred in March and April, said Murtugudde.