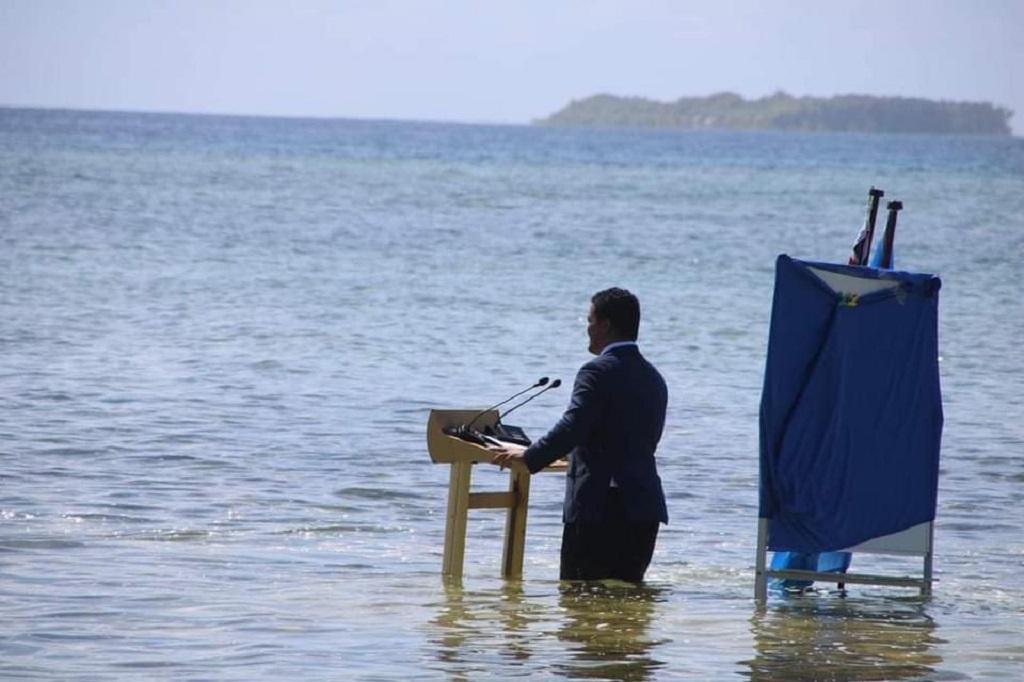 The Minister from Tuvalu in the South Pacific delivered his speech to CoP26 from the sea to illustrate the crisis they face with rising sea levels. Photo and caption: Sophie Howe / Twitter

United Kingdom Prime Minister Boris Johnson’s effort to showcase the 26th Conference of Parties (CoP26) to the United Nations Framework Convention on Climate Change in Glasgow as a highly successful Net Zero summit has hit the finance wall. Experts pointed out that finance can make or break its fate.

On Monday, as the ministerial meeting and active negotiation started, countries and country groups began raising the finance issue threatening to put the Net Zero agreement, which the UK is seeking as a Glasgow breakthrough, under cloud.

India led the charge with sharp observations about failures of developed countries to provide the $100 billion every year they had committed a decade ago in the Cancun summit. Other country heads were also quite critical and a study just before the CoP26 also pointed to the failure.

India led the charge on finance

India, still smarting from being put under pressure to announce Net Zero deadline in Glasgow, hit back on Monday by flagging its “deep disappointment” with the status of talks in Glasgow climate summit in the matter of finance. It even hinted that the achievement of its recently announced Net Zero target remains linked with finance flow from developed countries.

“At the outset, we record our deep disappointment with the deliberations in the CoP26 so far. Developed countries must accept the historical responsibility and provide the financial resources to the developing countries,” read the Indian statement made during the first high-level ministerial dialogue on climate finance.

The statement reminded that “developed countries had taken a commitment in 2009 to mobilise $100 billion per year by 2020 for climate action by developing countries (but) the promise has not been met”. It also demanded that “the scope, scale and speed of climate finance have to increase considerably”.

India said in its statement:

It is imperative that developed country parties act decisively to deliver on their commitment to provide financial support — a pre-condition for climate action by the developing countries. The resources mobilised must be new and additional, climate-specific with emphasis on public finance.

India also said that “the resource flow should be equally available for mitigation and adaptation”.

“We seek greater predictability and transparency in respect of the finance flows and believe that appropriate implementation of Article 9.5 of the Paris Agreement, including a clear outline of the elements that should go into assessing the climate finance provided, is critical,” according to a representative of India.

Article 9.5 of the Paris Agreement mandates that the developed countries will biennially communicate indicative, quantitative and qualitative information on projected levels of public financial resources to be provided to developing country parties.

"Finance is key and no Net Zero target can be achieved without adequate funds," a senior environment department official said.

“It has been over a decade since the annual $100 billion pledge and the world is still waiting for its mobilisation and delivery,” said a statement of BASIC countries, a coalition of Brazil, South Africa, China and India, made on Monday.

The lack of a serious approach to climate finance will jeopardise the enhanced mitigation and adaptation ambition as well as Net Zero pledges of parties, the coalition warned.

Among the BASIC countries, China announced 2060 as its Net Zero deadline, while India has set the date for 2070.

Bangladesh, presently the chair of vulnerable countries, pointed out Monday that availability of agreed finance of $100 billion is a redline for any agreement in Glasgow.

“The money, $100 billion, should be split 50:50 between adaptation and mitigation; $100 billion support should be raised from 2024,” said Saber Hossain Chowdhury, chairman of the parliamentary committee on environment, forest and climate change in Bangladesh, to this reporter.

“The funding is shaping up to be a make-or-break issue at the CoP26 summit in Glasgow. The $100 billion target is an acid test for whether rich countries are sincere about tackling climate change,” said Molwyn Joseph, minister for environment for Antigua and Barbuda.

“We are not asking for handouts; we are asking for compensation for damages,” he added.