Earth has continued to grow green since the turn of the century and this could help moderate global warming, according to new maps released by the United States National Aeronautics and Space Administration’s (NASA). High levels of carbon dioxide increased photosynthesis, according to authors of a review paper published in Nature Reviews Earth & Environment.

NASA had in February 2019 established that earth was greener than it was in the 1980s. It had computed the data using Moderate Resolution Imaging Spectroradiometer on NASA’s Terra and Aqua satellites. 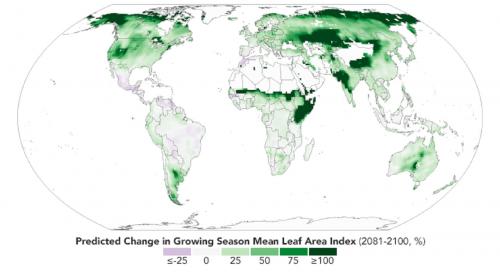 A significant increase in green cover in boreal and Arctic regions was observed in the new maps, which researchers attributed to rising temperatures. For example, Svalbard in the high-Arctic saw a 30 per cent increase in greenness, according to Rama Nemani of NASA’s Ames Research Center and co-author of review paper. The green cover grew with an increase in mean summer temperature from to 4.7° Celsius from 2.9° Celsius (37.2° to 40.5° Fahrenheit) between 1986 and 2015.

Authors of the paper reviewed more than 250 published articles and found that the global greening was due to increased levels of carbon dioxide in the atmosphere. Interestingly, this phenomenon made earth cooler; as vegetation consumed carbon dioxide, it performed evapotranspiration. According to scientists, global greening since the early 1980s may have reduced global warming by as much as 0.2° to 0.25° Celsius.

"It is ironic that the very same carbon emissions responsible for harmful changes to climate are also fertilising plant growth, which in turn is somewhat moderating global warming,” said Jarle Bjerke of the Norwegian Institute for Nature Research and co-author of the paper.

Shilong Piao of Peking University, and lead author of the paper, said:"This greening and associated cooling is beneficial, but reducing carbon emissions is still needed in order to sustain the habitability of our planet."