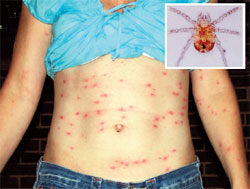 SCRUB typhus fever, once prevalent only in rural areas of the country, has been reported from some areas of Delhi. Since June, more than 1,000 cases were reported across Himachal Pradesh. Of these, about a dozen succumbed.

Scrub typhus fever, transmitted by a mite found in scrubs, can become fatal if left untreated.

There is no data on the number people affected by the disease because of the absence of a mechanism to record it. However, doctors in cities have expressed surprise over occurrence of a rural disease in urban areas.

Between February 2011 and January 2012 at least 65 patients were admitted to hospitals in Puducherry, states a study by S Viswanathan and his team at the department of general medicine, Indira Gandhi Medical College, Puducherry. The study was published in Plos One this year.

The whys and wherefores

Scrub typhus is transmitted by the mite Leptotrombidium deliense, which inhabits sharply demarcated areas in the soil, where the micro ecosystem is favourable. When human beings tresspass the area, mite larvae, or chiggers, attack them, transferring the pathogen Orientia tsutsugamushi, and leaving characteristic spots like those by cigarette burns, on the body. Symptoms of the disease are fever, severe headache, rash, cough, sore throat and abdominal pain.

Health experts say the fatal fever may be spreading to city areas such as Delhi because of human beings’ encroachment of mites’ demarcated areas. “In the last few years, rapid deforestation has taken place, increasing chances of growth of scrub grass required for mites to lay eggs,” says Mahajan. “Now people have more resources and move around in hilly areas during vacations or for picnics. This may be a reason why city people are coming in contact with mite,” he adds.

G Varghese of Christian Medical College, who has done pioneering work to understand scrub typhus in the country, says climate change could be a big reason for its occurrence in cities.

Researchers at the department of preventive medicine and public health, School of Medicine, Ajour University, Korea, also established the relation between rising global temperature and scrub typhus. “The incidence of scrub typhus in hyper-endemic region during the outbreak period was related with temperature and humidity during the summer,” the research states. The article was published in 2010 in Journal of Preventive Medicine and Public Health.

According to Varghese, change in the way antibiotics are used could also be a reason for its rise of the disease. Till the 1980s, tetracycline and chloromycetin were the main antibiotics used for various types of fevers, Mahajan explains. With the introduction of newer antibiotics, such as cephalosporins and betalactam, which have fewer side-effects but are not effective in scrub typhus fever, there was a resurgence of scrub typhus. Doctors should treat patients using presumptive treatment just like in malaria, instead of waiting for expensive diagnostic results, he says.

Increasing awareness can reduce the morbidity and mortality in the country, says Prashant Kumar, joint director, health department, Rajasthan. Last year, 40 cases were reported in the state, the maximum being from Alwar district. However, no case has been reported this year so far. “We are taking precautions to prevent the disease. We have told health workers, who move from door to door, to keep a close eye on fever cases and report it,” he says.

Diagnosis and treatment of Scrub Typhus – The Indian scenario