Turtle populations in the Red Sea could be turning overwhelmingly female because of a rise in sea temperatures caused due to anthropogenic climate change, a new study has showed.

A team of researchers from the King Abdullah University of Science and Technology in Saudi Arabia selected five sites across the region that were favoured by hawksbill and green turtles, a statement by the university said December 3, 2020.

Sand temperature data at the nest depths of both species were collected by automated data loggers every 15 minutes for five months — May to September 2018.

The Red Sea is home to five out of seven species of sea turtles. In order to maintain a 50:50 ratio of males and females in the population, a temperature of 29.2 degrees Celsius is pivotal. Above this, hatchlings would be predominantly female.

The sand temperatures at four of the sites exceeded 29.2 degrees, leading the team to the conclusion that ‘feminisation’ of the population could be already happening.

Titled Potential feminization of Red Sea turtle hatchlings as indicated by in situ sand temperature profiles, the study was published in Conservation Science and Practice. 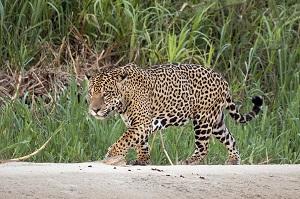 A new study led by the Queensland University of Technology in Australia has found that while the jaguar can survive climate change, extremes of weather can diminish its chances of survival.

The jaguar is the apex predator in central and South America and is classified as ‘Near Threatened’ by the International Union for the Conservation of Nature.

The team of researchers drew on information gathered during a 2016 trip to the remote Pacaya Semiria Reserve of the Peruvian Amazon, a statement by the university said November 23, 2020.

They also looked at a census study based on camera traps and scat analysis, jaguar ecology, and an elicitation study of indigenous rangers in the reserve.

The team mapped out six jaguar population scenarios based on a number of factors.

The team found that while jaguars could cope with extreme drought and flood, there was a very high probability that the population would crash if the conditions were repeated over short time periods.

Titled A stochastic model of jaguar abundance in the Peruvian Amazon under climate variation scenarios, the study was published in Ecology and Evolution.

Why is the Brahmaputra so wide? Due to sediment 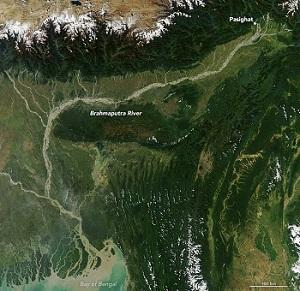 The National Aeronautics and Space Administration (NASA) posted a satellite image of the Brahmaputra river on its website November 29, 2020, and explained that the cause behind the river being so wide was the tonnes of sediment it carried.

The image, captured on November 9, showed the course of the Brahmaputra in its lower reaches, from Pasighat to its confluence with the Ganga in Bangladesh.

The image was captured by the Moderate Resolution Imaging Spectroradiometer or MODIS on NASA’s Aqua satellite.

“Notice how the narrow channel widens after passing the town of Pasighat, transforming into a braided river with multiple, interlacing channels. As the water slows in the flatter Brahmaputra Valley, it loses its capacity to carry sediment, depositing the excess silt in sandbars. In the course of a few kilometers, the river channel increases its width twentyfold,” the report noted.

It said the river was next only to the Yellow river in China in terms of the amount of sediment it carried.

Malayan Giant Squirrel could vanish from North East after 2050: Study 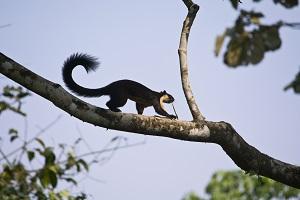 The Malayan Giant Squirrel, one of the three species of giant squirrels found in India, a new study has found.

The study was done by the Zoological Survey of India that comes under the Union Ministry for Environment, Forest and Climate Change, a report in the Indian Express said.

It projected that the numbers of the Malayan Giant Squirrel could decline by 90 per cent in India by 2050.

If urgent steps were not taken, the species could be extinct in the country in subsequent decades.

The squirrel is currently found in West Bengal, Sikkim, Assam, Arunachal Pradesh, Meghalaya, and Nagaland. But the destruction of its habitat could lead to it being restricted to only southern Sikkim and north Bengal.

The study listed deforestation, fragmentation of forests, crop cultivation and over-harvesting of food, illegal trade in wildlife and hunting for consumption as the main threats to the squirrel.

Brazil lost rainforest the size of Jamaica in 2019-2020: Institute

Brazil lost Amazonian rainforest equal to the size of Jamaica between August 1, 2019 and July 31, 2020, according to data released November 30, 2020, by the Brazilian National Institute of Space Research (INPE).

This is in line with President Jair Bolsonaro’s stated policy to exploit the world’s largest rainforest.

Nearly 11,088 square kilometres (sq km) of rainforest were deforested in this period, an increase of 9.5 per cent, a statement by non-profit Amazon Watch said.

Amazon deforestation had steadily increased since Bolsonaro took over as Brazil’s president two years ago, Amazon Watch said. Prior to his taking over, deforestation was below 10,000 sq km for a decade.

The explosive rate of forest loss greatly exceeded Brazil’s own target established in its 2010 National Policy on Climate Change, where a maximum of 3,900 sq km of deforestation was projected for 2020.

Brazil was 180 per cent above its target, greatly undermining its ability to fulfil commitments in the Paris Climate Accord expected to go into effect in 2021, Amazon Watch said.

The spike in deforestation meant that Brazil was the only country in the world reporting a major increase in greenhouse gas emissions in a year when the global economy stalled due to the novel coronavirus disease (COVID-19) pandemic.

Deforestation in Brazil during 2019-2020 had occurred mainly in the Amazonian state of Pará, that accounted for 46.8 per cent of the deforestation.

La Niña influence: Indian winter to be colder than normal 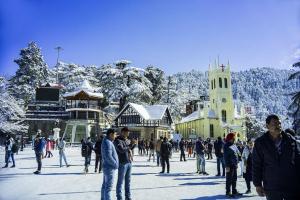 The ongoing winter season from December 2020 to February 2021 will be colder than usual in several parts of India, according to the seasonal outlook for temperatures from the India Meteorological Department (IMD).

IMD, however, has not made any prediction about the prevalence of cold wave or cold day conditions in any part of the country so far.

Usually, the seasonal outlook for temperatures, issued by the IMD before summer and winter seasons every year, carries predictions for heat waves and cold waves respectively.

This means that the gap between day and night temperatures will be wider, which could create erratic winter conditions impacting agricultural practices in the Rabi season, especially the growth of wheat that is the principle cereal crop in north, northwest and central India.

It is characterised by the unusual cooling of the central and east-central equatorial Pacific Ocean. It usually brings in colder than normal winters in India.

Bihar plans migratory bird festival to raise awareness about them

Bihar is holding a bird festival for the first time as part of its initiative to save migratory birds that arrive in the state in large numbers every year. The three-day festival is being organised in eastern Bihar’s Bhagalpur district and will tentatively start from December 11, 2020.

The festival is being jointly organised by the Bhagalpur forest division, non-profit Bombay Natural History Society and the local Mandar Nature Club.

Forest officials and environmentalists said the selection of Bhagalpur for the bird festival held special significance.

This was because the 60-kilometre-long stretch of the Vikramshila Dolphin Sanctuary between Sultanganj and Kahalgaon had long been a hub of migratory birds.

Migratory birds normally come during November and stay till March, finding the region favourable for spending the winter, according to environmentalists.

“A large number of migratory birds arrive in Bhagalpur every year and our prime objective behind holding the bird festival is to create awareness among people about the importance of migratory birds,” S Sudhakar, divisional forest officer (DFO), Bhagalpur, told this reporter December 1.

He said such programmes would prompt common people to take care of birds and preserve them in the interests of society and environment.

“People’s participation is a must for conserving migratory birds,” the DFO said.

Various programmes will be organised during the three-day festival. One of them will be a ‘bird racing’ programme involving finding birds, their habitats and their ecology.

“Teams of participants will be sent to different locations to watch birds, take their photographs or sketch their image. The team found the most accurate in identifying the birds will be rewarded,” Gopal Sharma, deputy director of Zoological Survey of India said.

Other programmes during the bird festival include a presentation on birdlife and gathering public opinion on setting bird ringing stations in Bhagalpur.

The ‘ringing of birds’ involves trapping them in nets and snares. Subsequently, they are weighed and their details logged before a metal ring inscribed with a unique number is tied to their tibia bone.

This helps birdwatchers and professional conservationists log their presence across the globe.

Ornithologists have found Bhagalpur to be a ‘bird paradise’ with a number of migratory birds reaching there every year.

The main attractions for migratory birds in the eastern part of the country were plenty of water bodies, such as Vikramshila Dolphin Sanctuary on the Ganga river, Jagatpur lake and Kanwar lake, Mishra added.

Environmentalists said such initiatives could put a check on incidents of bird poaching in the state. Poaching of migratory birds has been quite rampant in Bihar as they fetch a lot of money for bird catchers. They are mostly sold to lovers of wild game for prices ranging between Rs 500 and Rs 1,500.

Disengaging with WII should be given rethink, MoEF&CC tells PMO: RTI

The Union Ministry of Environment, Forest and Climate Change (MoEF&CC) has told the Prime Minister’s Office that the proposal for it to disengage with the Wildlife Institute of India (WII) should be reconsidered, according to Right to Information (RTI) data.

The MoEF&CC also wrote that it agreed ‘in principle’ to disengage with the Indian Institute of Forest Management (IIFM).

The Ministry had October 28, 2020, sent the PMO its comments on the recommendations by the Department of Expenditure (DoE), Union Ministry of Finance, information obtained under RTI showed.

The DoE, in its report of September 30 on the rationalisation of autonomous bodies under the MoEF&CC, had recommended that the ministry ‘disengage’ from five autonomous institutions under it — including WII and IIFM.

The DoE recommended that the ministry disengage from both IIFM and WII within three years and reduce their funding by 25 per cent each year and turn the institutes into deemed universities.

The ministry wrote to the PMO that the timeline for disengagement from the IIFM should be five years, along with a one-time capital grant for future sustenance of the institute, the RTI showed.

The ministry also said that a proposal for granting IIFM the status of ‘Institute of National Importance’ was under consideration.

On WII, the ministry said the institute could best address its mandate of wildlife science and conservation by remaining within the ministry. It therefore proposed to the PMO that the disengagement should be reconsidered.

It wrote that as the institute was engaged in carrying out fundamental research in the field of wildlife management, it would not be feasible to make it financially self-dependent.

On October 15, the WII director had written to the ministry saying that the functioning of the institute would not be viable without the support of the MoEF&CC.