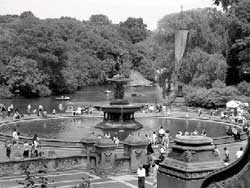 in the past 21 years, parts of the Northern Hemisphere have become much greener than they used to be. But this may not be good news as the greenery is a result of warmer temperatures, warn researchers. After studying satellite data, researchers from Boston University, usa , and the National Aeronautics and Space Administration (nasa) have confirmed that plant cover above 40 degrees North latitude -- covering cities such as New York and Beijing -- has been increasing dramatically since 1981. "It is yet another evidence of the human impact on climate," said Ranga Myneni, one of the study's authors and associate professor of geography at Boston University, usa . In the northern latitudes, temperatures have risen by about 0.8 c since the 1970s (Associated Press, September 10, 2001).

"When we looked at temperatures and satellite vegetation data, we found that year to year changes in growth and duration of the northern vegetation are closely linked to changes in temperature," said Liman Zhou, coauthor of the study and researcher at the Boston University. According to him, the area of vegetation has not extended, but the existing vegetation has increased in density. The researchers also examined the differences in vegetation growth of North America and Eurasia because the patterns and magnitudes of warming are different on the two continents. They correlated vegetation data with the temperature levels and found that Eurasia is greening more than North America. This effect is more prevalent over a broad contiguous swath of land, starting from central Europe through Siberia to far-eastern Russia, where most of the vegetation is forests and woodlands. North America, in comparison, shows a fragmented pattern of change notable specially in the forests of the east and grasslands of the upper midwest region.

The researchers also analysed changes in the timings of the appearance and fall of leaves of both the continents for a period spanning over two decades. They found that Eurasia has a growing season that is now almost 18 days longer, on average, with spring arriving almost a week early and autumn delayed by 10 days. In North America, the growing season appears to be as much as 12 days longer.

"The results of our study are important because of their possible implications for the global carbon cycle," says Myneni. The increased vegetation cover might influence the equations for the industrialised countries with regard to meeting their Kyoto Protocol targets. But this would depend upon the type of the increasing vegetation. "All types of tress may not be good for the planet," says Myneni.