Climate change has brought monumental shifts in weather patterns, fishing zones and migration of fish population to different areas. The phenomenon has impacted the source of livelihood for many in coastal India — pushing them to turn to technological assistance to practice sustainability.

Numer8 Analytics Pvt Ltd, a data science firm, has come to their rescue: The firm analysed changes in the cyclical pattern of potential fishing zones in 2018. It found that nearshore fishing zones had drifted away further into the deeper seas.

It also analysed the coastal vulnerability index for Kerala and Odisha post-2018 Kerala cyclone and Cyclone Fani in 2019. Following this, it developed an app, ‘OFish’, which provides fishermen with weather updates, helps them identify fishing zones and ensure that government guidelines on fishing are practiced.

The technology helps fishermen on the sea as well as on the coast.

“About 170 million people in India are at the forefront of climate change and experience sea-level rise, tropical cyclones and storms, according to a United Nations report. The latest cases being of the Cyclone Amphan in Bay of Bengal and Cyclone Nisraga in the Arabian Sea,” said Devleena Bhattacharjee, founder of the data science firm.

“Think of it like a Google Map for fishing. A fisherman opens the app before he goes out to fish and the platform shows him fishing zones near his chosen port,” said Nandhini Karthikeyan, chief technical officer, Numer8.

The high-precision marine and ocean data helps them to venture in safer areas of the sea.

“Every trip made by fisherman and its details can be recorded in the app, allowing traceability to the end customers. Once the fishermen reach the shore, the aggregator helps him sell fish directly to buyers, earn a higher sales margin and realise faster payments,” said Karthikeyan.

The firm enables marine and port authorities in India and Sri Lanka to monitor overfishing and unregulated fishing in the Indian coasts. It is currently working with fishermen in Maharashtra and Kerala in India.

The firm build their work on the 11 climate factors identified by the International Collective in Support of Fishworkers (ICSF), said Karthikeyan.

“The above elements — combined with pollution, increase in number of fishing boats, unregulated means of fishing and a highly unorganised fishing sector — has led to a decline in fisheries through the years,” Karthikeyan said. 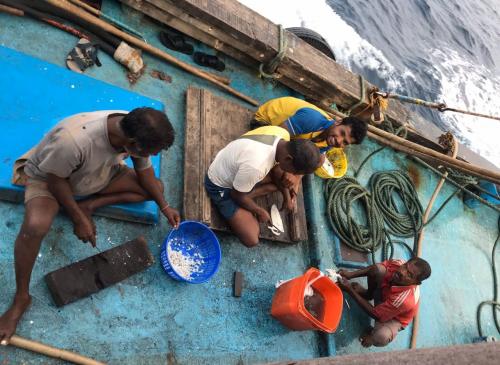 The three-key findings were: Fishermen spent more time finding fish; they invested more fuel; and got exposed to unpredictable weather conditions. Fishermen have abject sales margin and have to navigate through middlemen. They have no institutional credits to apply to for formal operational loans and fall prey to high-interest through informal loans.

Numer8 is incubated by the European Space Agency, which enables it to use Sentinel and National Aeronautics and Space Administration data for ocean observation data analysis and forecasting.

“We analyse geospatial data for over 10 parameters in building our ocean models. We provide higher precision weather data for tides, the height of waves, wind direction, wind speed and various other marine weather updates,” Karthikeyan said.

She said the supply chain monitoring and seafood traceability features use a blockchain as a backend for an end-to-end data transparency.

“Transparent and real-time insights into movements of the product creates a more responsible and collaborative approach to trade, reducing costs and time. Every seafood consumer is made aware of the source,” she said.

The exercise adds to quality assurance and provides a clear understanding of how sustainable production is not only a good-to-have, but is becoming an imperative, she added.

“The technology has helped Indian and Sri Lankan fisherfolk to decrease their operational cost by four per cent and increase their sales margin by 10 per cent,” Karthikeyan said.

The mobile phone app generates a QR code for every consumer and provides complete information about fishermen who managed a catch.

It also helps them find a market to sell the catch without the need for a middleman.

“This assures a higher sales margin and a faster payment realisation. The direct benefit is of great value as the fishermen depend less on informal and high-interest loans that keep them indebted for life,” Karthikeyan said.

The traceability feature gets extended to provide ocean authorities with details of fishing and non-fishing boats in the sea on their mobile phones.

“Even though our technological features are independently available, they are internally connected and meaningful,” she added.

Scientists, however, have warned that technology alone is not enough to practise safe and sustainable fishing, and may only auger exploitation of water bodies.

Mathew Koll Roxy, a marine scientist at the Indian Institute of Tropical Meteorology, Pune, said, “Our research showed that Tuna catch rates declined by 50-90 per cent in the Indian Ocean over the last five decades.”

Roxy said that monitoring fishing activities is possible in coastal areas, but difficult in international waters.

The scientist added there is an urgen need to regulate the amount of catch by each fisherman. “There needs to be a limit on fishing and strict adherence to government regulations,” he added.