While Iceland and Canada are the nations scoring high on climate and planet specifics, the United Kingdom led the league of nations in technology 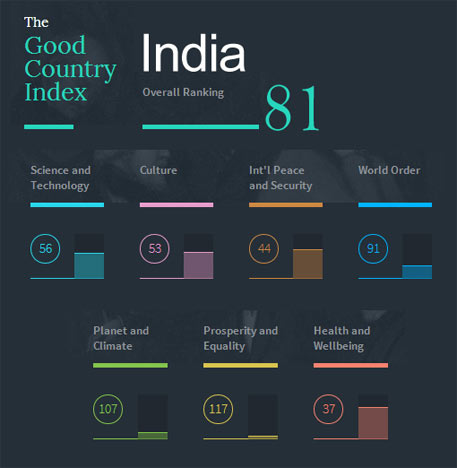 A group of researchers who assessed countries of the world on 35 separate internationally accepted indicators have adjudged Ireland as the world’s best country.

Their analysis, which was published as The Good Country Index, evaluated 125 countries and was prepared by the researchers after using reliable datasets from the United Nations, the World Bank and other recognised international institutions. The countries were judged on parameters like science and technology, international peace and security, education, pollutant emissions, and health and well being.

While, in the overall ranking, India has been ranked 81st; strife-torn countries like Libya and Iraq were ranked among the lowest.

Researchers said Kenya was an “inspiring example” which showed that making a meaningful contribution to society is “by no means the exclusive province of rich 'first-world' nations”. The African nation managed an overall rank of 26 and was ranked 16th in the parameter of prosperity and equality.

(Not) on a greener path
Leading in parameters like bio-capacity reserve and curbed CO2 emissions, Iceland and Canada are the nations scoring high on climate and planet specifics. India, however, has been ranked 107th on this parameter, Pakistan followed at 108;  China performed relatively better and was placed at the 99th spot. United States, which has till now been accused of not taking any strong measures to fight climate change, was ranked 39.

For India, this has come almost a month after a report rated Delhi, the capital city of India, as the city with worst air quality in the world. African nations, Kenya, Ghana and Nigeria were ranked above India.

Health and prosperity
While India was placed at rank 37 on health and well being parameters, prosperity and equality played the spoiler. At rank 117, the country has been performing poorly when it comes to development assistance for the needy. Spain has emerged as world’s healthiest country, the US was ranked seven and Pakistan 43. Kenya was found to be doing well on this parameter as well and was ranked 28.

Exporting arms a concern
There are some surprising elements as well. Countries like strife-torn Egypt and Nigeria are among the best performers in the peace and security category. The website goes on to explain that the countries that score well in this category are evaluated on the basis of  export of arms; direct involvement in international violent conflicts and cyber security.

The United States of America, on the other hand, was ranked as low as 114 in international peace and security. Exporting of arms and Internet security are the parameters that negatively contributed to this rating. The United Kingdom, which pipped all other countries to emerge as best country in science and technology, has been ranked 94 in international peace. The reasons that could be attributed to this lower ranking are same as those for the US.

Leaders in technology
The United Kingdom led the league of nations in technology. Journal exports, Nobel prizes, patents and increasing number of international students can be attributed to European country’s success in technology. Perceived as one of the IT leaders in the world, India was ranked 56th in science and technology. China was two spots ahead at 54.

Report: The state of India’s cities and towns

Report: India’s economic growth and environmental sustainability: what are the tradeoffs?