If we continue to adapt sunflowers to our needs as climates change, we must ensure diverse genes are conserved for future generations 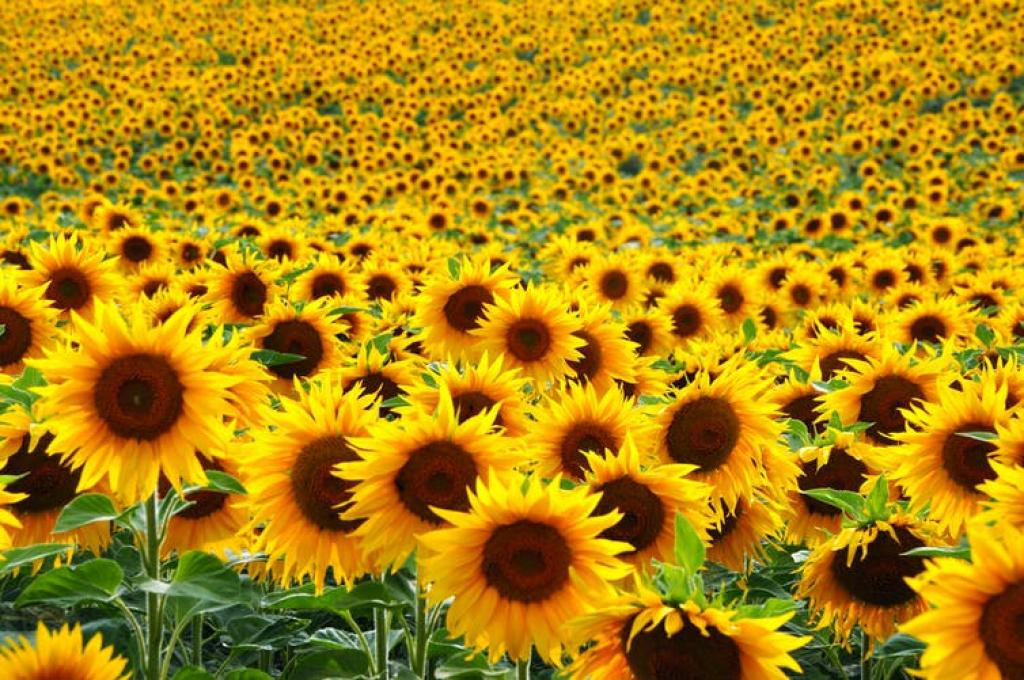 Fields of sunflowers are now a common – and beautiful – sight all over the world. They have inspired artists from Van Gogh to Klimt, and continue to do so in the age of Instagram, if the recent selfie craze is anything to go by and as one Canadian sunflower farm discovered. It was forced to shut after thousands of tourists seeking the perfect selfie caused chaos. An astonishing 7,000 vehicles caused a traffic jam stretching over four kilometers.

But when sunflowers were introduced to Europe from the Americas in the early 16th century they were little more than garden novelties. The 16th-century English herbalist, John Gerard, was disappointed that the sunflowers in his Holborn garden in London were only 4.3 metres tall (those of his European competitors reached 7.3 metres). Today, sunflowers, with their massive, yellow flower heads are among the most recognisable plants on the planet.

The growth in their prevalence – and that of sunflower selfie snaps – is largely due to their ballooning use for oil. Over the last 60 years, changes to our diets and industrial needs mean the area of global oil crop production has more than doubled. Four oil crops consume most of this land: oil palm, soya, rape and sunflower.

Sunflowers have two main commercial uses, oil and confectionery (for direct seed consumption). Oil varieties of the flower have small, black, oil-rich seeds with thin hulls, which are pressed to produce an edible, almost tasteless, pale oil, rich in unsaturated fatty acids (especially oleic acid and linoleic acid). The oil is popular for cooking, margarine manufacture and even bio-diesel production. Leftovers from oil extraction are used to make high-protein animal feed. Confectionery types, on the other hand, have large, striped, oil-poor seeds with thick hulls. Both oil and confectionery types are the results of centuries of careful selection and breeding from wild plants.

In North America, the sunflower’s native continent, the harvest contributes little to global production; peak production happened in the late 1970s only to fall dramatically in the 1980s. Today, most sunflowers are grown in the former Soviet Union.

The annual sunflower, a member of a genus of about 50 species from the Americas, was domesticated in North America about 5,000 years ago. Native North American uses of sunflower ranged from food and medicine, through a fibre and dye plant to a source of musical instruments and bird snares.

Commercial interest in sunflowers as an oil crop was slow to develop across most of Europe and North America. In contrast, Russians were using sunflowers as an oil crop by the late 18th century, perhaps because the Russian Orthodox Church did not prohibit the oil’s use during Lent. By the end of the 19th century, Russians had selected highly productive oil and confectionery varieties, which were re-imported to North America in the baggage of Russian immigrants.

During the early 20th century, the Soviet plant breeder Vasilii Stephanovich Pustovoit began selecting sunflowers for oil content. In 1913 seeds contained approximately 30% oil, by the late 1950s seeds contained approximately 50% oil. Much of the change was achieved by breeding for thin hulls surrounding the kernels. By the 1960s, Western commercial sunflower oil production was based on the Soviet sunflower variety “Peredovik”.

Soviet sunflower seeds even got mixed up with the Cold War – high-quality seeds surreptitiously moved among Soviet and American plant breeders.

Hybrid sunflower seed can be made by slowly, meticulously and expensively emasculating individual flowers to create females, which are then pollinated by hand. Alternatively, mutant sunflowers, incapable of producing fertile pollen, are used as female parents in hybrid crosses.

Insects are essential for producing the vast quantities of the hybrid sunflower seed planted each year, since pollen must be transferred from male-fertile to male-sterile plants. Without insects, hybrid sunflower seed production would be uneconomic. But once in the farmer’s field, the sunflower crop does not rely on insects: crop seeds are produced by flowers that are fertilised with their own pollen. But new seeds will have to be purchased for the next season.

Sunflower breeding continues in earnest today. New demands are placed on breeders by the environments in which farmers want to grow sunflowers and by consumers in the ways they want to use the harvest. Height, for example, is something every child wants their sunflower to achieve. But to the farmer, tall sunflowers must be avoided. Energy used to push up stems cannot be used to make seeds. And heavy rains and strong winds will knock over tall, top-heavy plants.

The dramatic changes of form and use of sunflowers over the last century show what can be achieved by breeders if suitable genetic resources are available. If we continue to adapt sunflowers to our needs as climates change, we must ensure diverse genes are conserved for future generations – ensuring those sunflower fields remain on offer as the perfect place to take a picture.

Read more: After Svalbard: why safety of world seed vaults is crucial to future food security