May of 2014 warmest May in recorded history

Global average surface temperature in the months of March, April, and May was also the highest since 1891

The May of 2014 was the hottest in recorded history, according to data revealed by the Japan Meteorological Agency (JMA) and US' National Aeronautics Space Agency (NASA).

Although NASA and JMA used different calculation methods to gauge average temperatures for the month, both arrived at the same conclusion. Combined global and land temperatures during May deviated by 0.76°C, the highest deviation since 1880. NASA’s data, however is subject to change as their analysis does not include reports and data from China and “current May 2014 data are therefore not directly comparable to previous records”. 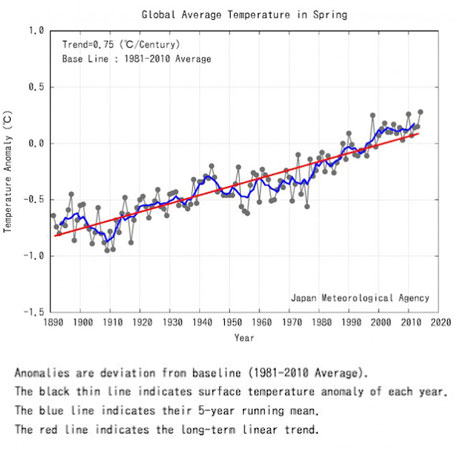 The temperatures are said to be worsened because of the effects of El-Nino in the tropical Pacific region. The phenomenon, which refers to a warming of surface waters, may lead to 2014 becoming the warmest year in recorded history. The India Meteorological Department had also predicted decreased rainfall in various parts of the country due to the El-Nino effect.

Concerns over global warming and climate change have increased with JMA releasing a report on May 26, revealing an atmospheric carbon dioxide concentration exceeding 400 parts per million (ppm). The global average surface temperature in the months of March, April, and May was also the highest since 1891. It is also of significance that all 10 of the biggest temperature anomalies have occurred post 1995. Current global climate change policies and reduction in carbon emission plans, therefore, seem to be falling short.