While overall mangrove habitat loss declined between 2000 and 2016, losses from natural causes such as erosion and extreme weather declined more slowly than human causes

Mangroves are disappearing — and researchers have been repeatedly stressing to redevelop / preserve their habitats. In a recent development, a team of researchers worked with the United States National Aeronautics and Space Administration (NASA) and created the first map of the causes of change in global mangrove habitats between 2000 and 2016.

The related study, published in Global Change Biology, showed the overall mangrove habitat loss declined during the said period. However, losses from natural causes such as erosion and extreme weather declined more slowly than human causes such as farming and aquaculture.

The team used high-resolution data from the joint NASA-US Geological Survey Landsat programme. The maps, according to researchers, can help conservation efforts and analyse carbon cycle impact on them.

Mangroves are trees and shrubs that grow in tropical and subtropical coastlines in wet and moist soil. They shield the coastline from erosion and damage, and store carbon in their roots, trunks and in the soil. 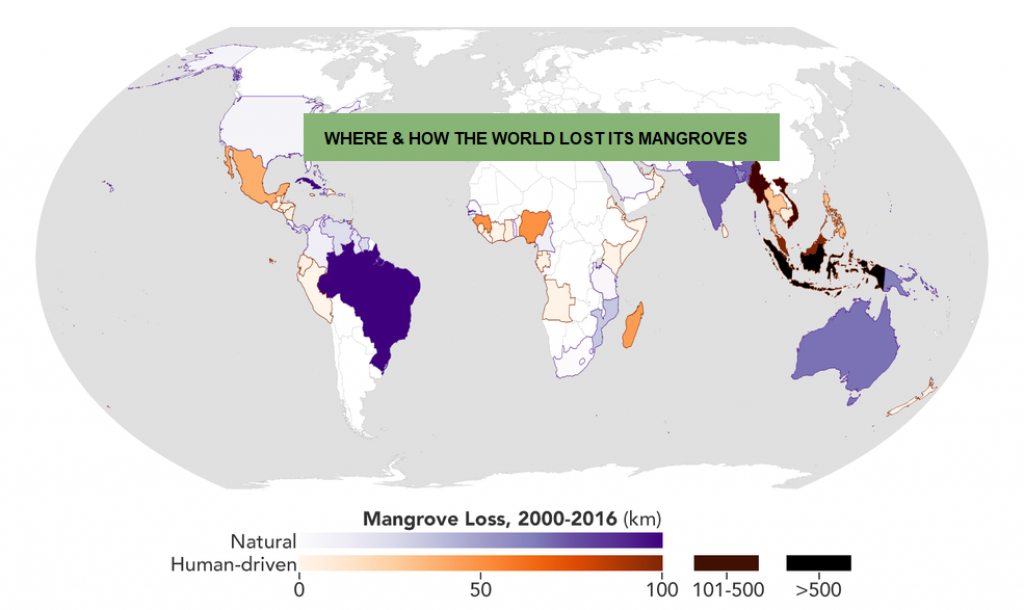 The NASA map This map shows the location and severity of mangrove habitat loss, measured in kilometres, caused by natural and human drivers from 2000 to 2016. Darker areas experienced more loss in the period. Credit: NASA Earth Observatory

At the core of NASA’s experiment was the need to know the primary human and natural threats are for their area. The team used high-resolution imagery from Landsat 5, 7 and 8, as well as machine-learning algorithms to create a high-resolution map of the losses between 2000 and 2016.

But that was not it: The maps also showed what drove the losses.

Nearly 1,300 square miles of mangrove forests were lost during the study period (2 per cent of global mangrove area). At least 62 percent of the lost area was due to human causes, mainly farming and aquaculture. The rest was due to natural causes, including erosion and extreme weather events, the team found.

The human and natural drivers of loss declined over time, but the human impact declined more quickly.

Commodities (CM) — a combination of rice, shrimp, and oil palm cultivation — served as the primary global driver of mangrove loss, constituting 47 per cent of global losses from 2000 to 2016. Shoreline erosion (ER) represented the second highest percentage of global losses at 27%, and extreme weather events (EWE) contributed 11 per cent of losses.

The most significant hotspot of mangrove ER loss occurred in Bangladesh, where loss along the seaward edge of the Sundarbans led to ER contributing nearly 80 per cent of national losses. Smaller scale permanent losses attributed to extreme weather events were also observed in Sundarbans, Bangladesh.

Nearly 130 square kilometre of coastal ER also occurred along the eastern coast of Brazil, mainly as a result of discharge from the Amazon river.

The vast majority of the total global direct anthropogenic loss, nearly 80 per cent, was concentrated in six nations: Indonesia, Myanmar, Malaysia, the Philippines, Thailand, and Vietnam, according to the study.

Within these six countries, 82 per cent of loss was human-driven, compared to only 33 per cent in all other nations. Anthropogenic losses remained consistently concentrated in Southeast Asia, primarily due to widespread mangrove conversion to aquaculture and agriculture.

Approximately 92 per cent of all global CM losses occurred in Southeast Asia, serving as the primary loss driver in the majority of the region's mangrove-holding nations.

Meanwhile, non‐productive conversion of mangroves constituted 398 square kilometre (12%) of global losses, with Africa being the only continent with NPC as the primary cause of loss.

Lead author of the Liza Goldberg, a NASA Goddard intern expressed optimism at the results.

“On the one hand, it’s great. It shows that conservation efforts are increasing in effectiveness on a local scale, and there’s an increase in awareness of the importance of mangroves, economic damage from storms and loss of life. But on the flip side, the decline in losses, especially in Southeast Asia, means that in many areas, there are simply no more mangroves to lose,” NASA Earth Observatory quoted her as saying.

Between 2000 and 2016, both natural and human causes of mangrove habitat loss declined, but natural causes like erosion and storms declined more slowly than human causes. Credit: NASA Earth Observatory

While natural drivers of loss also decreased, they did so more slowly, the team said. “The main takeaway is that conservation and restoration efforts should continue to increase their focus on evaluating and mitigating natural threats,” Goldberg said.

Mangroves provide shoreline protection from extreme storms and tidal waves, According to Temilola Fatoyinbo, one of the authors of the study: