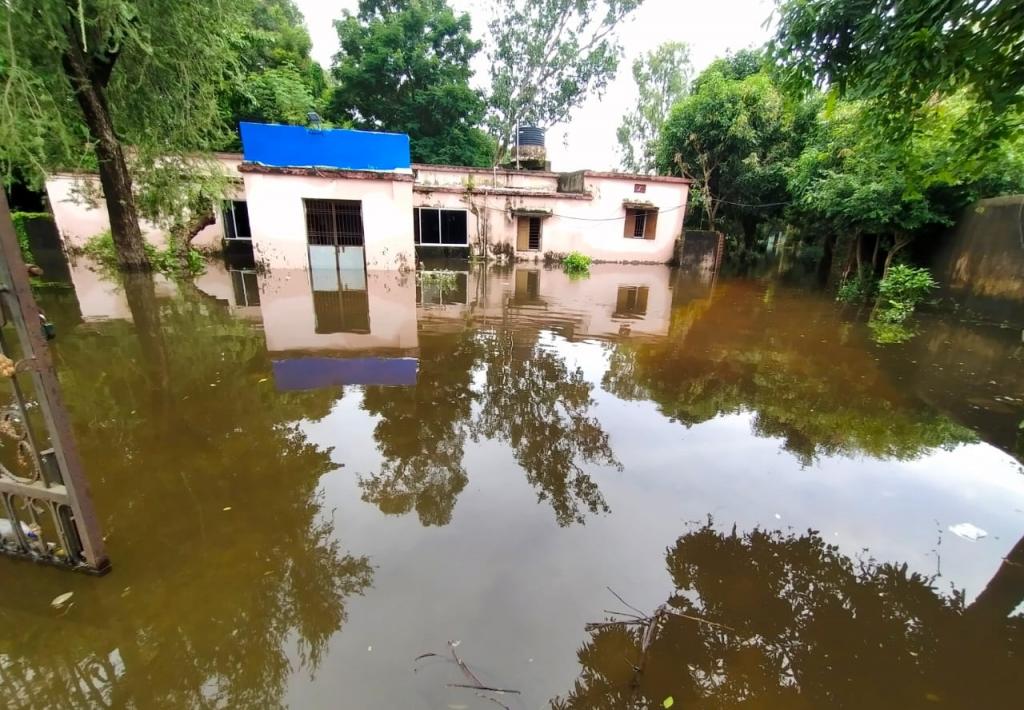 A duck breeding farm in Cuttack, Odisha. As many as 460 ducklings died after rainwater flooded the farm. Photo: Hrusikesh Mohanty

India experienced unpredictable showers starting September 13, usually the phase of monsoon retreat. In 100 hours alone, cumulative monsoon rainfall progressed from a deficit of 7 per cent to 4 per cent on September 15.

The country as a whole on September 15 was 4 per cent deficit in rainfall. On September 13, monsoon rain was deficit by 7 per cent. So, nearly 50 per cent of the gap was bridged in just three days.

The India Meteorological Department issued a forecast September 16 warning of heavy rainfall in Odisha and Gangetic West Bengal from September 18-20. 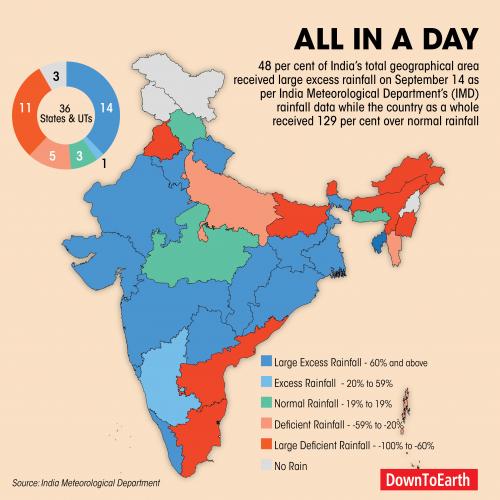 The country received 63 per cent more than normal rainfall compared September 14’s 129 per cent, according to data by Indian Meteorological Department. Over the last couple of years, retreating monsoon has caused flood-like situations in southern states like Kerala, Tamil Nadu and Karnataka due to climate change. The September fluctuations — which Down to Earth is tracking — currently being experienced by northern states may be attributed to climate change.

Heavy rains dealt a blow to the fish farmers across coastal villages in Odisha. As many as around 460 ducklings have died in the government-run duck breeding farm in Cuttack’s Pokhariput as rain water entered the farm.

The ducklings — three to eight-weeks-old and of Khaki Campbell species — were kept in the farm for breeding. “We have shifted 198 ducklings to another home,” said Ramesh Chandra Sahu, in-charge of the farm.

The Khaki Campbell is much in demand among duck farmers in the state as they lay 300 eggs a year on average, he said.

Similarly, a large number of fishes have escaped from the private ponds, government hatcheries and prawn farms as they were inundated due to heavy rains in Puri, Cuttack, Kendrapara and Jagatsinghpur districts.

“I cultivated fish in my one-acre pond, but it got flooded with rain water. Nearly 20 quintal fish swam out,” said Simachal Behera from Astarang, Puri.

The shrimp farmers of coastal villages like Raghunathpur, Balikuda, Erasama and Kujang in Jagatsinghpur district as well as Chandabali in Bhadrak district were severely affected by heavy rains.

“I suffered huge losses due to the cyclone Yaas in May-end. Now, heavy rains have inundated my pond and dashed all of my hopes of a profit,” said Bikash Das, a shrimp cultivator in Kujang.

Odisha recorded 98 per cent excess rainfall in September 2021. As against the normal rainfall for September, the state recorded 250.4 millimetres rain till September 14; September 13 and 14 alone accounted for 135.6 mm rainfall, sources from regional meteorological office, Bhubaneswar, said.

Puri recorded 342.50 mm rainfall in 24 hours from September 12, official sources said. It was the highest-ever rainfall recorded in a single day in the district, sources said.

The exact loss due to the rains in the state in the fishery sector was yet to be assessed, said a government officer. The assessment of the damage will be made only after the water recedes, he added. The Special Relief Commissioner (SRC) asked authorities of the affected districts to submit the damage report by September 22.

Meanwhile, Pradeep Kumar Jena, SRC, preliminary reports from the districts have revealed that as many as 3,839 houses collapsed, while around 1.30 lakh hectares of agricultural land affected in the rains.