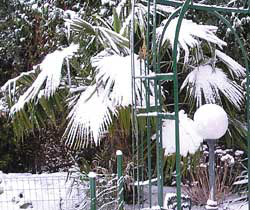 palms can reflect climatic changes. Researchers have found Trachycarpus fortunei, a Chinese palm, generally found in warmer conditions, is now found even in temperate regions including southern Switzerland. Scientists say rising temperatures have made it conducive for the tropical plant to grow in temperate regions.

There are chances the plant would spread further. The researchers from Germany's Bayreuth University have created a computer simulation which helped them identify new regions where the plant may establish itself. They have analysed the factors which limits the plant's growth and compared it with the climate data, using the bioclimatic model and found a strong correlation between the changes in climatic factors and the spread of the palm to new areas.

The length of the growing season and the average temperature in winter are the two factors that decide the regions the palm grows. The growth of the palm is restricted to regions where the average temperature does not go below 2.2c. If the growing season is longer, the plant is able withstand the effects of the cold temperature. Studying how plants are distributed and their response to climatic changes helps predict the effect of future climatic changes on global biodiversity, says Henrik Balslev of Aarhus University, Denmark.

However, Sas Biswas, head of the botany department at Forest Research Institute in Dehradun says, the movement of the palm could be due to local climatic changes and may not reflect a larger worldwide climate change. He says more information on the palm's ecology is essential. The study was published in the November 2007 issue of the journal, Global Ecology and Biogeography (Vol 16, Issue 6).