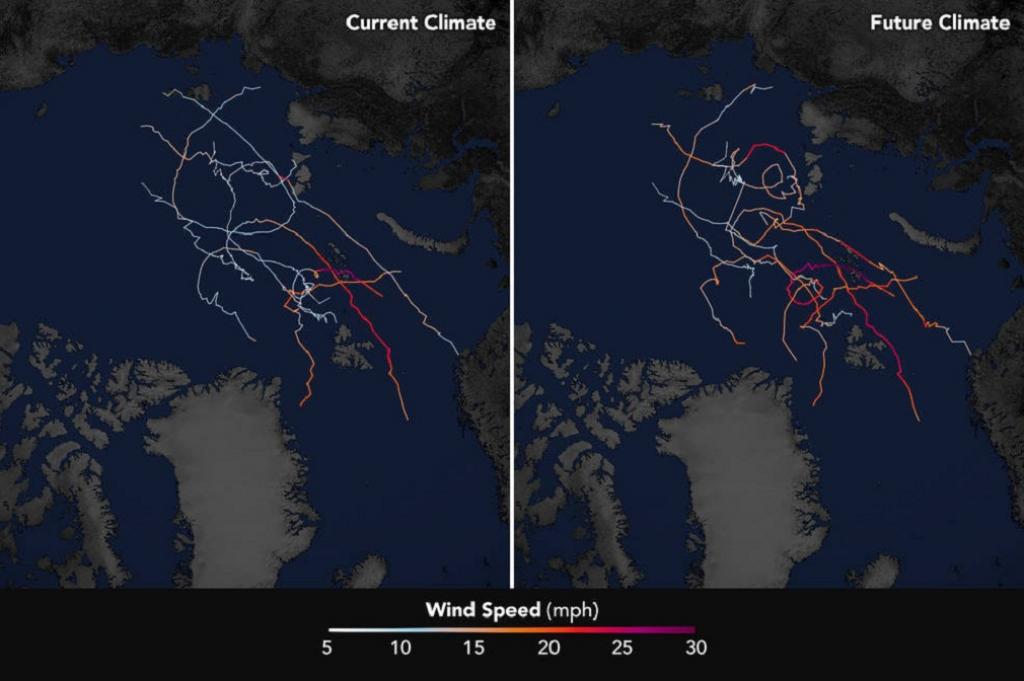 The maps above show simulated storm tracks and wind speeds of nine Arctic cyclones. The left image represents simulated storm tracks as they hit the Arctic in the past decade. The right image shows how the cyclones are projected to respond to climate change by the end of the century. Photo: NASA Earth Observatory/Joshua Stevens, using data from Parker, CL et al

Rapid warming due to climate change has severely affected the Arctic, with frozen parts of the Earth receding drastically. Now, scientists project that spring Arctic cyclones will intensify by the end of this century because of sea ice loss and rapidly warming temperatures.

Hurricanes threaten North American coastlines every year and they appear to be intensifying, according to National Aeronautics and Space Administration. Ocean heat, air humidity, wind — all these ingredients factor into hurricane formation. And all are affected by climate change.

Read more: The Magnetic North Pole is shifting and that too very rapidly

The global mean temperature is currently at 1.15 degrees Celcius above pre-industrial (1850-1900) levels and the last eight consecutive years were the eight hottest years of humanity, a recent report had found.

The changing weather could increase risks for Arctic ecosystems, communities, and commercial and industrial activities.

Cyclones, also known as hurricanes and typhoons, are synoptic weather events that transport heat and moisture into the Arctic and have complex impacts on sea ice and the local and global climate.

Arctic cyclones are low-pressure systems of varying size (around 200—1,500 kilometres in radius) and are often associated with large changes in temperature and humidity, strong winds, and heavy persistent precipitation.

Cyclone wind speeds could increase up to 38 mph, depending on storm characteristics and the region’s environmental conditions, the study found. If cyclones start to bring rainfall in the spring, sea ice may begin melting sooner and less of it will survive the summer melt season.

“The cyclones will be much stronger in terms of pressure, wind speeds, and precipitation,” said Chelsea Parker, who led the study. “Initially, storms will drop more snowfall, but as air temperatures continue to rise and we cross above freezing temperatures, storms will drop rainfall, which is a big change for the sea ice pack.”

More intense storms will be a hazard to shipping activities, oil and gas drilling and extraction, fishing, and Arctic ecosystems and biodiversity, she added. Parker is a research scientist at the University of Maryland and NASA’s Goddard Space Flight Center in Greenbelt, Maryland.

The NASA team analysed computer simulations of nine cyclones that hit the Arctic in the past decade.

The warming and sea ice loss of recent decades did not appear to have a noticeable effect on the behaviour of those spring storms, Parker noted. “Cyclone lifecycles and characteristics during spring have not yet been notably altered due to recent climate change,” the study said.

The scientists then simulated the Arctic with even warmer temperatures and less sea ice cover — and the results changed dramatically. “The exacerbated cyclone conditions may affect a greater area of sea ice and ocean and other components of the Arctic system for a longer duration in a warmer climate,” it further said.

Observations from space and the ground have shown that the Arctic is warming nearly four times faster than the rest of the planet.

Scientists need more details about Arctic cyclones to form more accurate predictions of how the storms will influence sea ice that is already declining, as well as how the loss of ice will affect storm intensity.