This summer was the hottest on record for the northern hemisphere, says NOAA

The northern hemisphere faced its warmest summer on record in 2020, while the entire planet Earth suffered the third-hottest three-month season and the second-warmest August, according to the United States’ National Oceanic and Atmospheric Administration (NOAA) September 14, 2020.

The average global land and ocean surface temperature in August was 0.94 degrees Celsius (°C) above the 20th-century average of 15.6°C.

This made it the second-warmest August behind August 2016 in the 141-year record of temperatures, said scientists at NOAA’s National Centers for Environmental Information (NCEI). The 10 warmest Augusts all occurred since 1998, with the five warmest occurring since 2015.

The northern hemisphere also faced its warmest August, with a temperature departure from the 1.19°C average, besting an earlier record set in August 2016. 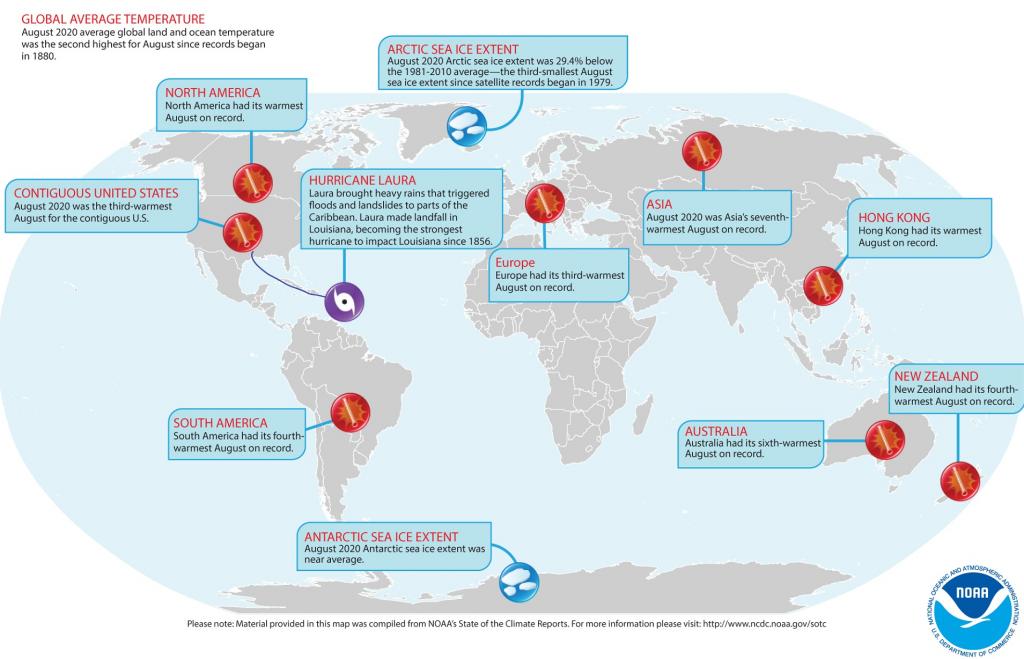 The symptoms of this warming can be seen across the planet, from increasing melting rates for ice sheets in Antarctica and Greenland matching the worst-case scenarios for climate warming, to wildfires in California, US and Siberia, Russia and the collapse of Canada’s last ice shelf.

The Arctic region — a barometer for temperature changes across the world — faced the largest decline in sea ice in the past 41 years due to global warming. The region warmed at twice the rate as the rest of the world because of anthropogenic greenhouse gas emissions.

The increased rate of warming was due to a phenomenon called Arctic amplification, where melting ice hastened the process of warming by exposing areas not good at reflecting heat back into the atmosphere, creating a feedback loop between melting ice and rising temperatures.

Verkhoyansk, a town in Siberia, recorded the highest temperature in the Arctic circle in the last 140 years at 38°C. The town is known for extreme temperature swings, from around -67°C to 37°C.

This new record had an imprint of global warming and the impact of such warming can be witnessed in India as well, where western disturbances resulted in heavy rain in March, April and May and, thus, resulted in early locust attacks in Rajasthan and spread as far as Chhattisgarh for the first time in decades.

The three-month season between June and August this year surpassed both 2016 and 2019 that were earlier tied for the hottest.

The period — that marks the southern hemisphere’s winter — was Earth’s third-warmest in the 141-year record of 0.92°C, above the 20th-century average.

The current year was also likely to rank among the five-warmest years on record, according to a statistical analysis conducted by NCEI scientists.

Some other findings pointed out by NOAA included North America having its hottest August on record, while Europe, Asia and the Caribbean region faced their hottest January-August period and South America year-to-date average temperature ranked as the second-hottest ever recorded.