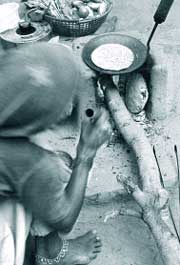 firewood and other biofuels, such as animal manure and agricultural waste, used for cooking in India could be a potential trigger for climate change in the region, according to a study by an Indo-us team. But some Indian scientists have questioned the methodology adopted to arrive at the conclusion.

The study team led by Chandra Venkataraman of the Indian Institute of Technology (iit), Mumbai, said the combustion of biofuels releases large quantities of black carbon (bc), or soot, which absorbs light leading to increased atmospheric temperatures and lowering of temperatures on land. These changes could have a major impact on rainfall patterns, potentially making floods and droughts more intense. The findings of the study carried out by scientists from iit and the University of California, usa appeared in the March 4 issue of Science (Vol 307, No 5714).

The scientists estimate the effect of particulate pollution, such as soot, is 10 times more in the region over the Indian Ocean as compared with the global average. To understand how much soot is generated by burning biofuels, they conducted laboratory tests with the one-pot stove traditionally used in rural Indian kitchens. They burnt 11 different biofuels -- four firewood varieties, six agricultural residues and dried cattle manure -- and measured the soot particles emitted.

By extrapolating the findings to the whole of India, they concluded 42 per cent of soot comes from cooking, the other major sources being fossil fuel (25 per cent) and open burning (33 per cent).

"We, therefore, suggest the control of these emissions through cleaner cooking technologies, in addition to reducing health risks to several hundred million users, could be of crucial importance to climate change mitigation in south Asia," they wrote in the paper. They observed similar considerations might apply to other parts of Asia, Africa and South America, where residential use of biofuels is prevalent.

Using cleaner fuels, such as liquid petroleum gas or kerosene, would be the best way to reduce soot emissions, say the researchers, but these alternatives are more expensive than biofuels and less accessible to poor households.

According to J Srinivasan, the head of the Centre for Atmospheric and Oceanic Sciences at the Indian Institute of Science in Bangalore, such calculations could be "misleading." He cautions, "The authors have used the data on firewood consumption and converted it to soot emissions using a conversion factor. The results of the paper need to be verified with in situ observations of soot concentrations before any reliable predictions can be made."

Says A Jayaraman, an aerosol expert at the Physical Research Laboratory in Ahmedabad, "The authors have done a thorough lab experiment in estimating the emission factors and used them to show that biofuel combustion is the biggest source of bc emission in India. In spite of the large uncertainty in estimating consumption of different biofuels, their results could still be correct."

But, "the question here is how can we compare such survival emissions with luxury emissions from developed parts of the world," he quips. "It's quite like the big, fat American shouting at a thin, fragile Indian housewife cooking food, 'You are causing global warming. Eat salad instead.'" Nonetheless, he felt there is an urgent need to improve the accuracy of the inventory of different biofuels consumed in the country.

Meanwhile, Kirk Smith, professor of environmental health sciences at the University of California, Berkeley, usa said the study is not an attempt to blame the developing countries. "Developed nations are still responsible for the majority of greenhouse gas production," he told Scidev.net , an online magazine on science and development.

According to the Intermediate Technology Development Group, a not-for-profit organisation in the uk, indoor pollution caused by burning biofuels kills more children each year than malaria or hiv/aids. Among the diseases linked to stove use are pneumonia, lung cancer and respiratory tract infections. The problem is exacerbated by the poor quality of stoves, says the organisation, which estimates that the number of people worldwide relying on polluting fuels for cooking will increase by 200 million to 2.6 billion by the year 2030.