Coffee - not for birds 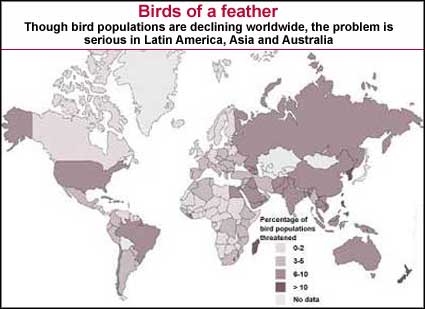 About 11 per cent of all known bird species are threatened with extinction, according to the World Resources Institute. Fragmentation or loss of habitat is mainly responsible for this decline, but harvesting for food and trade and competition from introduced species are also responsible. For example, conversion of traditional coffee plantations, which serve as habitats for migratory birds, to industrial coffee production methods may have devastating consequences for migratory bird populations. This is especially true of Central America and Columbia, where many migratory routes converge. Studies in Columbia and Mexico show coffee plantations developed along modern lines support 90 per cent fewer bird species than traditional coffee plantations.