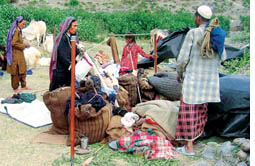 The move, cited as a solution to the long-standing issue of settlement of Van Gujjars, is the result of an order of the High Court of Uttarakhand at Nainital. On June 20, the court upheld a petition by Van Gujjars in terms of The Scheduled Tribes and Other Traditional Forest Dwellers (Recognition of Forest Rights) Act, 2006, and directed the state forest department to "include the names of the left out Ban Gujjars in the list prepared for rehabilitation of the Ban Gujjars residing in the Rajaji National Park, Dehradun".

The Ban Gujjar Kalyan Samiti, a committee representing the Van Gujjars, filed a petition in 2005 after they were served with an eviction notice by the then director of the national park (see 'Brief respite', Down to Earth, May 31, 2007).

Prime contention of the Van Gujjar community was that though the number of their families had increased, official records had been maintaining the figure at 512 since the 1950s. And hence, they demanded to be updated to the current figure, which they claim is more than 3,000 families.

Forest rights groups have welcomed the court ruling. This is for the first time that the rights of the forest dwellers through The Scheduled Tribes and Other Traditional Forest Dwellers (Recognition of Forest Rights) Act, 2006 are being recognised. The act though notified, is yet to come into force. The court order is expected to become reference points in many forest-rights related cases.