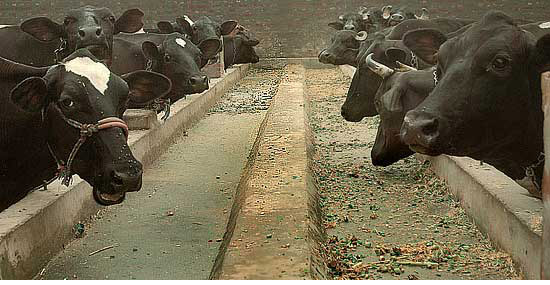 Conditions are ripe for an upturn in India's dairy sector. The government has lifted its ban on the export of milk powder at a time when increasing demand is sending prices of dairy products skyrocketing globally. If the market worked on a straightforward play of demand and supply, Indian producers--most of them small-scale operators--would have been cheering. But the market does not paradoxical though it might sound, despite the advantageous global situation profit margins are shrinking and many small dairy owners have folded up.

"Profit margins have halved because fodder prices have increased and the animals need a lot of expensive medical treatment. For me it is now a hand-to-mouth existence," says Ajay Pal of Uttar Pradesh's Ghaziabad district, who used to make a profit of Rs 15,000 a month from 25 buffaloes two years ago. Ajay Pal says he has increased the price of milk by just one rupee--to Rs 20 a litre--over the past year.

Ajay Pal's case looks curious considering that internationally dairy product prices have shot up by 46 per cent in just five months, from November 2006 to April 2007, according to the un Food and Agriculture Organization (see box Soaring demand). The spurt in demand has come mainly from emerging econ-omies such as China where people are consuming more milk products because of an improved standard of living.

While the dairy export market is opening up, competition has become weaker globally. Two of the biggest exporters of dairy products, New Zealand and Australia, have suffered a setback due to drought. The European Union has started withdrawing its massive subsidies to the dairy sector (see box eu regulations).

So there is a window of opportunity for India, the largest producer of milk. The ban the country imposed in February on the export of milk powder to meet domestic demand and keep prices in check, lapsed on October 1. "With the ban on exports lifted, private players are going to focus on exporting milk powder. As they will pay more to the milk producer to source more milk, cooperatives will get less milk. This competition will definitely lead to a price rise for domestic consumers," says Vijay Paul Sharma, chairperson of the agribusiness programmme at the Indian Institute of Management, Ahmedabad.

Prices have indeed risen. All the major players increased the price of milk by Re 1 in November. Just Re 1? That's where the small dairy operators' predicament lies. Milk prices in India are consumer-driven; even when cooperatives want to raise prices they cannot do so drastically--which means that small players can't either. "Prices are controlled indirectly by state governments or local bodies. Though there are no official provisions except in Maharashtra, cooperatives always consult the administration on price hikes," says an official who has had a long association with a leading milk cooperative.

Another reason is that cooperatives do not work for profit. "There is no interest in promoting the interests of milk producers," said a former marketing manager of a well-established milk cooperative. "Virtually every state has its own cooperative and the competition between them is stiff. This tends to keep prices depressed. For instance, in Maharashtra the government regulates the price of milk price, so Amul in neighbouring Gujarat has to follow that price line. Also, since policies are driven by consumers and the managing director and chairman of a cooperative are bureaucrats or politicians they keep an indirect tab on prices," says Sharma. He, however, adds that with opening up of exports, prices are bound to rise further.

"We don't see prices going up very fast," he says, warning that "the cost of production has gone up by 50 per cent, and if we do not increase the price along with it, it would result in a situation like wheat. The consumer will suffer in the long run when there will be less milk with us and he will be forced to buy it from private players."

In the past one-and-a-half years, the rise in milk prices has accelerated, going up by Rs 2-4. But coming after a long period of stagnant prices the recent hikes have not been commensurate with the increased cost of milk production. "With the animal population going up, grazing area is becoming scarce. Seventy per cent of farmers do not have enough feed/fodder for their animals," says A Sahoo a professor at the Veterinary Science College, Nainital. The degradation of pasturelands and grazing areas has been intensifying the fodder crisis steadily (see 'The milk that ate the grass', Down To Earth, April 15, 1999).

Other fodder sources have also become expensive. For example, a kilogramme of gram and fenugreek costs Rs 20 and Rs 25 respectively, which is Rs 5-6 more than what they cost two years ago. Deoiled mustard cake, hay and cottonseeds too have become expensive because of erratic rainfall and inflation.


The daily fodder for, say, 25 buffaloes can cost between Rs 1,500 and Rs 2,000. "People like me who run a dairy as the primary business and have no land to till, have to buy the fodder from the market, which is very costly. I increased the price of milk by only one rupee in the last year. If I raise the price further, customers threaten they will shift to Mother Dairy," says Ajay Pal.

Of the Rs 20 a consumer pays for a litre of milk, Rs 6-10 is the cost of fodder, says Rajiv Bhanawat, former ceo, Mother Dairy. According to N S Ramaswamy of cartman, a livestock welfare ngo in Bangalore, India is facing a 50 per cent shortage in cattle fodder. Things that were considered useless earlier, have become expensive. "Wheat bran, which is very essential for lactating cows, costs Rs 8 per kg up from Rs 2-3 a couple of years ago," says K K Singhal, head of the Dairy Cattle Nutrition Division, National Dairy Research Institute, Karnal.

For want of nutritious fodder, livestock suffers from low calcium and the milk dries up. Sharma points out another trouble increasing health problems in exotic, crossbred cattle. While the milk yield of these animals is high, they are vulnerable to diseases. Their feed requirement is also high. According to Singhal's estimates, the daily expense of medical care for a single cow or buffalo is Rs 10. "This includes the cost of vaccination, and treating teeth infections like mastitis, fever and digestion problems. The problems are much greater in cross-bred cows because their immunity is lower than that of indigenous cows," he says. Vets have also increased fees.

Rising fodder and medical costs are not the only worry. Sourcing water is also becoming difficult and expensive for landless milk producers. "Commercialization has forced small milk producers out because water and land resources have become scarce," says Y K Alagh, chairperson of the Institute of Rural Development in Anand, Gujarat.

In the absence of government support, many small-scale dairy operators, especially in Punjab, are shifting to cultivation of cash crops. Others like Ajay Pal are managing somehow.