Seeks formal recognition of its extended territory from UN

Denmark is seeking to extend its territorial boundaries by claiming ownership over 900,000 km of the Arctic continental shelf, which is rich in oil, gas, minerals and fish. The region Denmark is claiming as its own also includes the North Pole.

The Danish mission to the UN is reported to have submitted its proposal, seeking formal recognition of its extended territory with the global agency in New York.

"The objective of this huge project is to define the outer limits of our continental shelf and thereby - ultimately - of the Kingdom of Denmark," Danish Foreign Minister Martin Lidegaard said in a statement, according to Reuters and other websites.

Denmark has said its claim is valid following Arctic scientific research carried out by it, partly in collaboration with Canada, which showed the Lomonosov Ridge, an underwater mountain range beneath the Arctic Circle, is an extension of Greenland, an autonomous country within Denmark. 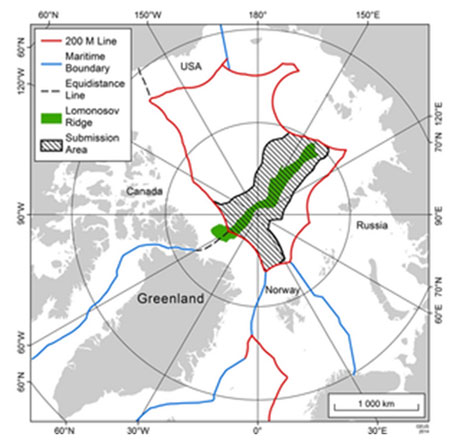 Denmark’s move is expected to open up a Pandora’s box, with Canada, Norway, Russia and the United States eager to control as much of the oil-rich Arctic territory as they can. The US Geological Survey says the region contains 15 per cent of the earth's remaining oil, along with 30 per cent of the planet’s natural gas and 20 per cent of its liquefied natural gas.

Lidegaard’s statement further says Norway already lays claim to an area overlapping the one outlined in the Danish submission to the UN, and there is “potential overlap with Canada, the Russian Federation and the US”.

Meanwhile, Moscow has also claimed that, based on scientific research, a Russian continental shelf extends further below the pole than previously contended. Russia’s natural resources minister said that Moscow would seek to expand its Arctic borders by 1.2 million sq km through the United Nations.

A news report by Business Insider says Russia is also undertaking rapid militarisation of its Arctic coast. “Moscow has opened its third military port, out of a proposed 16, along the Arctic and by 2025, Russia hopes to also have 13 airfields and ten air-defense radar stations in the region,” the news website says.

According to the United Nations, states are entitled to a continental shelf extending 200 nautical miles from their coast. Claims beyond that must be supported by scientific and technical data.