When the concept of evaluating forests and exacting their actual price from any party demanding their use was suggested in 2002, the idea was to check rampant diversion of forest land for non-forest purposes. The price tag thus put on a forest is called net present value or npv. Six years later, the idea has generated a few thousand crore rupees and a lot of cynicism among conservationists and resource economists.

"npv was mandated as a tool for forest protection. It has rather become a way of getting more and more forest land for non-forest use," said Kanchan Chopra, director, Institute of Economic Growth, Delhi, who headed the Expert Committee formed in 2005 as per the Supreme Court direction to suggest a methodology to calculate npv.

From mining to hydroelectric projects, examples of private companies getting vast tracts of forests by paying a fraction of their project cost are abundant. Recently, permission was granted to Vedanta Resources for mining Niyamgiri hills in Orissa that are the source of spiritual, cultural and economic sustenance for the Dongaria Kondh tribe. Vedanta has to pay an npv of Rs 55 crore and Rs 50.53 crore towards conservation and management of wildlife.

On September 19, the Polavaram multi-purpose hydel project in Andhra Pradesh got the permission to submerge mixed deciduous forest of the Eastern Ghat, including a large part of the Papikonda Wildlife Sanctuary. The Central Empowered Committee, a monitoring body of the Supreme Court on forest-related matters, however, observed that the forest coming under submergence was a mature ecosystem and could not be compared to compensatory plantation.

"There is no defined purpose when it comes to diverting forest land. In fact, diversion of forest land should come under the purview of public purpose given the gravity of the impact it has on forest communities," said Shankar Gopalakrishnan, secretary of Campaign for Survival and Dignity, a federation of tribal and forest dwellers' organizations. 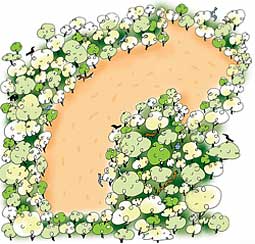 The Union Ministry of Environment and Forests (moef) gives the permission for diversion of forest land for non-forestry use--mostly industrial and infrastructure projects--through its Forest Advisory Committee. State governments send the proposals. Till 2002, the user agency or project proponent had to pay just for compensatory afforestation as per the Forest Conservation Act, 1980. Following the September 2005 order of the Supreme Court order they now have to pay npv as well at the rate of Rs 1.57 lakh to Rs 8.57 lakh per hectare (ha). The apex court, which has been hearing a forest case since 1995, has passed several orders in the case, affecting India's forest management policies.

"In the absence of any safeguards, the very purpose of establishing npv gets diluted," said Kanchi Kohli, a member of Kalpavriksh Environmental Action Group. A number of project proponents even plead exemption from paying npv. In 2005, South Eastern Coalfields asked the apex court to exempt it from paying Rs 600 crore as npv and compensatory afforestation for its project in Chhattisgarh, saying it was a huge sum. The court later asked them to pay Rs 350 crore.

Conservationists argue that npv does not take into account the intangible benefits of forests, like their social and spiritual significance. "In all the cases, the value of forests is calculated purely on economic terms," said Himanshu Upadhyay, an expert on forests with the Academy of Mountain Environics, an advocacy group in Delhi. Besides, forests are part of an ecosystem and not just resources; they also provide carbon storage and watershed services.

The Expert Committee, in its 2006 report which is yet to be discussed in the Supreme Court, had argued that protected and other ecologically sensitive areas should not be considered for diversion under any circumstances. "Identifying ecologically sensitive areas is a long process, so we recommended for the time being protected areas should be treated in this category," said Chopra. "But what we are seeing now is that even protected areas are being diverted, using fine arguments in the name of development."

According to the State of India's Forest report of 2005, Arunachal Pradesh, Madhya Pradesh, Maharashtra and many other states lost huge forests under very dense forest category during 2003 and 2004. The moderately dense forests--with canopy cover of 40-70 per cent--lost over 0.14 million ha. Compared to the previous assessment of 2003, which was for the 2000-2001 period, there was a loss of 63,000 ha of forest cover in 188 tribal districts that constitute about 60 per cent of the total forest cover.

The committee had also recommended settling the rights of those dependent on the forest land for their livelihood. It suggested holding public hearings.

Even the Supreme Court in its 2005 order had maintained that the payment of npv was for the protection of the environment and not in relation to any proprietary rights, and that the amount collected was to be used for achieving ecological plans, regeneration of forest and maintenance of ecological balance. Any such ecological plan is yet to take off.

Money recovered from project proponents--Rs 6,000--is lying idle with the ad hoc Compensatory Afforestation Fund Management and Planning Authority (campa) under the Centre. States wanted that the payments be made to them, but the Supreme Court denied in 2005. The Parliamentary Standing Committee on Science and Technology, Environment and Forest is scrutinizing a bill proposing to utilize this money.

Under the Compensatory Afforestation Fund Bill, state governments can seek money from campa for natural regeneration and afforestation. The bill proposed that campa funds be used for the Union government's Green India Programme, afforestation exercise on degraded forest land (see 'A blow for federalism', Down To Earth, April 30, 2008).

Will the bill succeed in compensating for the loss of some of the forest cover? For one, states do not always utilize the money. The latest Comptroller and Auditor General report on the diversion of forestland for non-forest purposes during 1996-2007 in Madhya Pradesh showed virtual non-execution of compensatory afforestation measures. Second, the bill proposes generating funds from felling trees, development partners and carbon credits, leading to doubts whether afforestation schemes will be taken up in the name of forest regeneration. "It seems that through the bill the government wants to introduce market mechanism and public-private partnerships in the management of forests. Market instruments will look at commercially viable specifics, trade and profit interests in the name of greening India," said Kohli.

The Expert Committee had recommended sharing npv between stakeholders local communities, states and the Centre. It prescribed that local communities should get 100 per cent of non-timber forest produce, fuel wood and fodder values; 50 per cent of the watershed value and 45 per cent of the biodiversity value. The committee wanted a share of npv to be transferred to the panchayats for regeneration and protection of natural forests. Contrary to this, the bill says npv be treated as part of the Consolidated Fund of India.

Conservationists also criticized including forest officials in the governing body of campa as proposed in the bill. "Most of the members who had the responsibility to protect the forest first cleared diversion in favour of industries and will now watch over compensatory afforestation," said Kohli.

The bill will streamline the flow of money, but the issues of environment impacts, loss of livelihood and natural forest remain unaddressed.