Chitapur: A village that counts its GDP in tamarind trees 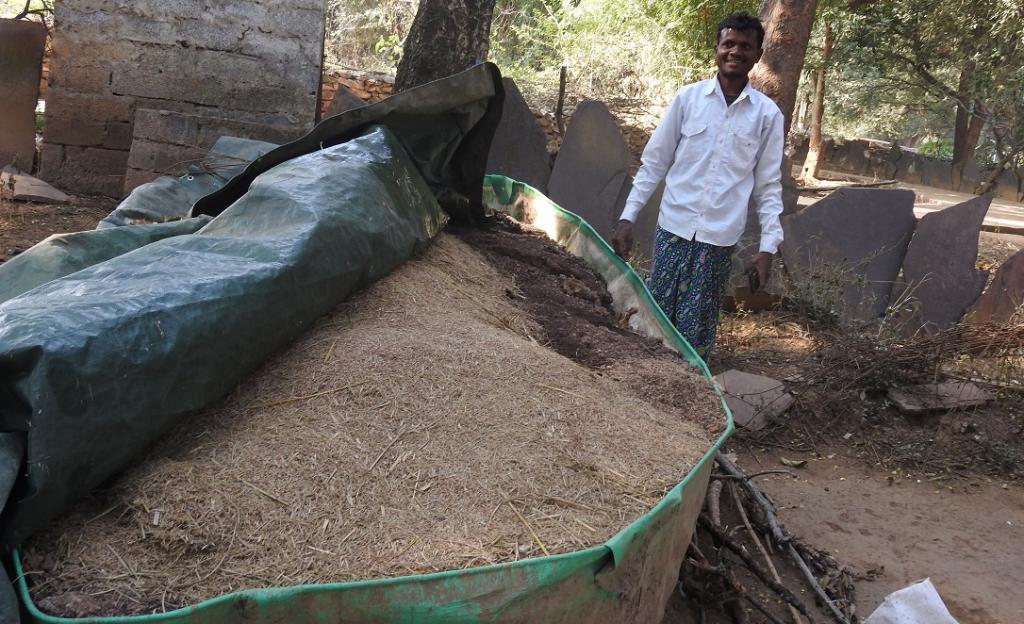 In Chitapur, there is a little bit of tamarind in everybody’s life. Rather, in this village in Chhattisgarh’s Bastar district, the tamarind tree is a living currency that sways people’s fate.

The village of 800 households has over 1,700 tamarind trees. Residents measure their economy by the tamarind trees. Its fruiting; the progress in growth of recently planted tamarind trees; and death of a tree due to old age are all big economic news that enjoy village-wide attention. Sometimes, even the Gram Sabha convenes to take stock of tamarind trees.

Early morning February 21, a group of village youth is out inspecting tamarind trees in the village. Most of them had stints of migration to faraway Kerala, Andhra Pradesh and Tamil Nadu for survival. After the national lockdown in March 2020 to fight the COVID-19 pandemic, all of them returned back to the village. Once they were in, the economy of tamarind took over their life-planning.

Usually, by February, the tamarind trees should have the fruits popping out. But this year, it is difficult to spot many trees with buds. The local belief or, one can say, an ecological indicator based on years of observation is that the year mango fruiting is high, tamarind production is low. This year, mango trees had started flowering gregariously since late January.

Lakmu Kashyap, a resident, is worried. “When one earns the most with certainty from tamarind collection, its non-fruiting has immediate economic impact,” he said. “A few families will become poor this year.”

The per capita ownership of tamarind trees defines the poverty line in this village. Lakmu’s assessment for this year was like witnessing people falling below the poverty line right there as the village’s currency collapsed.

Read more: After selling a minor girl to buy food, a prime ministerial visit, India’s face of poverty is drowned in debt

Chitapur’s geography has played out many historical events, often challenging its very survival. Its residents know this story by heart and always see a tamarind tree as the pivot of their existence.

Long ago, it got a change in name: from Dhani Karka to present Chitapur. At that point of time, leopards came to colonise Dhani Karka. Residents simply abandoned the village, along with the British who had a police station. After many years, residents came back to their ancestral village and renamed it as Chitapur, or “a village of leopards”.

Then, they discovered the worth of the tamarind. Many recount the stories passed on to them by ancestral oral memories. In a few of them, the tamarind tree features as the axis around which the residents belonging to the Dhurwa tribe stitched back lives again.

There was no agriculture to feed them; but the village was taken over by proliferating tamarind trees. Soon, it became the main food — the pulp and the tender leaves — till people went back to farming.

The local contractors of non-timber forest produce working for British merchants started bartering food for tamarind. The local weekly market finally saw the arrival of Chitapur tamarinds, both as a commodity to sell and as a currency to buy other foods.

“Everybody here inherits a tamarind tree, notwithstanding the poverty or prosperity of his / her ancestors,” Lakmu Nag, a 28-year-old videographer, who sends footage of local events to a district-centric television channel, said.

“If the tree is fruiting, one gets rich; if he / she plants more, the level of living goes up further; if one ignores, migrating out is the only way to survive,” he said.

He is more a tamarind collector than a TV journalist. “In our village and nearby areas, tamarind-related activities are more of a local concern. There are few events to record and I don’t earn much,” he said.

His ancestral land and homestead have some 20 tamarind trees. He has already planted five to pass on his wealth to the next generation. Shyly, he said: “I am a lakhpati.”

Villages like Chitapur have made the Bastar district the epicentre of the global tamarind trade. Its district headquarters Jagdalpur has Asia’s largest tamarind market with an annual turnover of Rs 500 crore, according to forest department figures.

Tamarind from here is exported to some 54 countries. “Forest produce is a major cash-income source in the Bastar region. Tamarind is particularly an economy of the poor that fetches good earnings,” Raju Rana, an activist working with tribal communities, said.

In a survey published by the Krishi Vigyan Kendra, Bastar in 2019, around 43 per cent of the tamarind producers were below the age of 35 years while most of them had 20 years of experience with the trade.

“It is a natural economic activity that we inherit from birth. We develop skills and also the craft of negotiating with markets,” Nag said. He added: “Youths prefer to deal with forest produce. Also, the less the size of the family farm, the more the dependence on tamarind.”

Nearly 70 per cent of their cash earnings come from forest produces. It features in the country’s 115 backward districts list and has been one of the poorest since the 1950s.

Over time, tamarind has come to define the Chitapur economy. There are three key sources of earning: Selling forest produce like tamarind and mahua, selling surplus foodgrains and taking up daily wage jobs either under public wage schemes like MGNREGA or migrating out to cities.

Two decades ago, the state government started the highly subsidised foodgrain scheme under the public distribution scheme that everybody in the village benefits from.

“Up to 35 kilograms of rice per head at a cheap rate (Rs 2 per kg) has to a large extent taken care of our hunger. Earlier, we used to face hunger for a few months. Now, no more. So, agriculture for food per se is no more than a compelling activity,” Santuram Nag, a small farmer who has been felicitated by the state chief minister for his organic farming initiative in the village, said.

He said that tamarind collection has replaced agriculture as the major cash-earning economic activity.

He has five tamarind plants, half of them inherited from his ancestors and the rest that he himself has planted on his farms and homestead. A matured tree fetches him close to Rs 12,000 a year. This is from selling raw 3-4 quintals of tamarind from each tree.

“Currently, I earn the most from selling tamarind. It has even displaced the mahua economy from which I earn around Rs 15,000 a year. Agricultural income hovers around Rs 30, 000,” he said.

Read more: Poverty is ecological: We must accept income poverty is the wrong yardstick

Kashyap, taking a break from his monitoring of tamarind trees in the village, gave a measure of the village economy. Applying the Rs 12, 000 per tree income from tamarind, the village annual trade turnover is Rs 204 lakh. Going by past experiences of low tamarind production, the village will still earn around half of the above figures.

But every tamarind tree has an earmarked purpose. Families have already planned a marriage or a community feast or buying new clothes or to invest on agricultural tools around the expected earnings from tamarind sale.

Also, in a fragile economy, loss from an important source means taking up another activity to compensate. In Chitapur, it means the youth might have to migrate out for jobs.

Despite the pandemic in the last two years, tamarind sales ensured people stayed put in the village. Many youths have already decided not to move out again in such uncertain times. “But, if the loss is huge we have to migrate out. Just to keep our income level at par with our planning, like that marriage or the new clothes,” said Nag.

This article is part of a series on stories from India’s poorest districts, particularly those that have featured in the country’s poverty ranking since 1951. The series examines the link between poverty and the local ecological degradation, whether the latter making poverty chronic in these geographies.