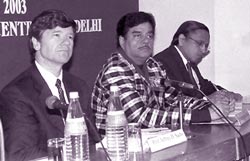 india has finally taken note of the correlation between health and economic deve-lopment. The Union government has set up the National Commission on Macro-economics and Health to understand the link between the two.

The panel will be jointly co-ordinated by the Union ministry of health and family welfare (mohfw) and the Union ministry of finance. It has been formed at the instance of the Global Commission on Macroeconomics and Health under the World Health Organisation. The agenda of the natio-nal commission is to identify major health issues in the country.

It is evident that the country's policymakers have finally realised that it is health which precedes economic deve-lopment and not vice-versa. "Health is the fundamental killer of the economy.And economic growth repays the money spent on health," pointed out Jeffrey D Sachs, director, Earth Institute, Columbia University, New York, at the launch of the national commission.

While India is spending just about us $4 per person per year on health, more than us $50 is required. Sachs feels that poor healthcare facilities in the country are a result of a fund crunch.

Even as the commission has been formed, experts who would be part of it have not been identified yet. "This would be done soon," revealed S K Naik, secretary, department of health, mohfw. The body would comprise of members from the Planning Commission, public health experts, economists, representatives of international institutions and non-governmental organisations, along with private sector experts and members of the civil society.