COVID-19: Even skilled workers line up for MGNREGA in Kurukshetra

With economic recovery uncertain, those who would earlier avoid central job schemes are now ready to take up work

It’s a little past 2 pm on a sweltering July afternoon. In Harayana’s Dhurala village, a few residents huddle around a Mahatma Gandhi National Rural Employment Guarantee Act (MGNREGA) sahayak (assistant), curiosity writ large on their faces. Every one has only one question — whether the next batch of work under the scheme had been sanctioned or not.

The sahayak appeared hopeful. He muttered that fresh work from the irrigation department would come soon.

The novel coronavirus disease (COVID-19) pandemic and the subsequent lockdown in March, 2020 stripped thousands of workers — those who worked in cities close to their villages as well as in metropolises — of their jobs and livelihood.

It is unusual, however, for Dhurala to employ villagers under the central government job scheme: Until now, it did not recognise MGNREGA as a significant employment generator. Most households here were either engaged in skilled masonry work in the nearby Kurukshetra city or were did agricultural labour work.

Bhim Saini, a mason, said he was hesitant to sign up for MGNREGA work in the initial days of the lockdown because he is “a skilled worker”. But as hope started to wear off soon, he joined johad (pond) construction work for rainwater harvesting and storage in the village. He worked for 32 days and earned Rs 10,000.

“Masonry has not started so far and MGNREGA has offered help. My family would not have survived without the money. I will participate again if more work is available in the village,” he said. 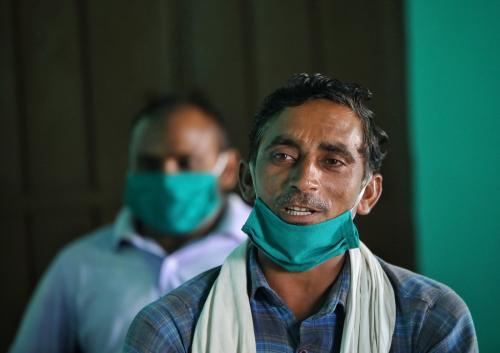 Bhim Saini, a mason, was reluctant to join work under MGNREGA initially

The demand too has significantly increased: There has been a 154 per cent rise in the number of families that sought work between April and July, 2020, compared to the corresponding period in 2019.

For example, in the last four years, Dhurala generated only 3,630 person-days. In 2020-21, the number reached 5,140 in the first four months (April-July). In 2019, the time since 2016, more than 100 households took up work under MGNREGA to construct a multi-purpose community centre in the village.

Not a single household demanded work in 2018-19 in the village; only three households sought work under the scheme each in FY 2017-18 and 2016-17. At least 226 households undertook work under MGNREGA in the first four months of the current FY.

Similarly, in nearby Dyalpur village, 204 households and 320 people demanded work and were subsequently employed under MGNREGA till July 20. Only one household had sought work under the scheme in 2019.

Suresh Kumar, 44, was one among the 320 people employed for the revival of a community pond in the village. He worked as a wood carpenter in Kurukshetra, but lost his livelihood to the lockdown. 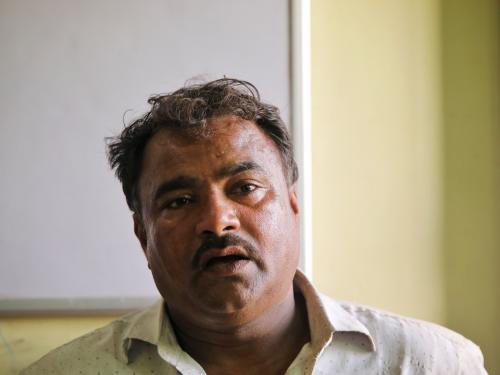 He and his wife have together earned Rs 14,000. Talking to DTE, Kumar said the scheme should be made sustainable in a way that it provides employment all-year-round.

“Even though the scheme is demand-based, we have to call people to work under MGNREGA as most of them have employment elsewhere here. It was, of course, different this time. We offered employment to villagers and created assets for the village,” said Manoj Kumar, additional block programme officer, Thanesar block, Kurukshetra.

In this block alone, at least eight new villages were brought under MGNREGA scheme.

Suresh Kumar said he didn’t take much interest in the scheme earlier as he was employed. “I never paid attention to the scheme earlier. But now I think I can stay in my village and earn. I would not have to run to the city if the scheme continues to provide work,” he added.