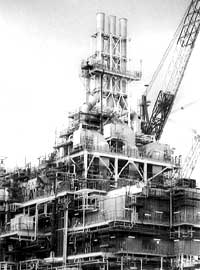 In a move that will see the world's deepest oils drilled off the East African coast, the Kenyan government has signed an exploration treaty with a uk- based company. Although the move is likely to expand Kenya's fuel supply and get the government out of the mess caused by the losses of the Kenya Power and Lighting Company (kplc), the drilling could damage the environment of the region. The government is negotiating to have its power system connected to the South African grid.

The British company, Star Petroleum, which has already got the rights to explore for oil in an area located in the Indian Ocean offshore of the Kwale District will now be undertaking exploration 2000-3000 metres beneath the surface.

Kenya is paying attention to oil exploration to reduce the money it spends on importing the fuel. Last year, Kenya's oil import bill was about us $689 million.