On a fast track: How MGNREGA is allaying job distress in UP’s Jalaun

Rakesh Sahoti, 51, doesn’t know the name of the disease — he calls it the virus — but his life has changed since March 25, 2020. The country went into an unprecedented lockdown this day to curtail the novel coronavirus disease (COVID-19) spread, but at a cost: The livelihood of migrant workers.

Sahoti left for Pune from his home village Dhamna in Uttar Pradesh’s Jalaun some time in the beginning of March, hoping to spend some time with his son and earn some good money. Little did he anticipate the events that would unfold only a few days later.

“I got a job as a help at a nearby office and stayed with my son in his one-room rented house. I had only been working for two days when the government shut everything because of the virus,” Sahoti said.

The money was not enough to buy food. He and his son left for home on a Shramik train the first chance they got.

The Act, seen as “the monumental failure of the Congress government” by the Prime Minister Narendra Modi till a few years ago, has been a thread keeping the rural economy together amid the COVID-19 crisis.

Workers in rural areas are guaranteed 100 days of employment under the Act, at the daily wage rate of the respective state; each worker gets Rs 201 a day in Jalaun.

The works under the central government job scheme involves creation of community and individual structures such as community ponds, improving land productivity etc.

“I was worried how we will get by. But we could earn a little through MGNREGA,” Sahoti said.

At least 25,327 migrants returned to 574 Gram Panchayats between April and July, 2020, according to Jalaun district administration data. MGNREGA work has been being undertaken in all of them. 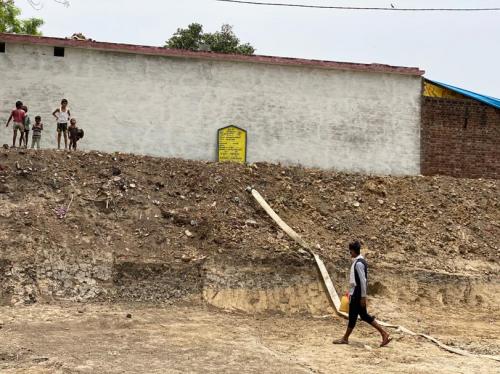 At least 206 workers returned to Dhamna after the lockdown. Photo: Ishan Kukreti

“We have never employed so many people under MGNREGA before. The government knew that apart from the MGNREGA work, villages would not be able provide any other source of income to the incoming migrants. So, we ramped up our efforts,” said AK Dikshit, the MGNREGA implementation in-charge of the district.

At least 206 migrants returned from cities to Dhamna after the lockdown; 138 of them were of working age.

“At least 32 migrants of working age have returned. We have created 22 new job cards and added 30 names to already existing job cards so far. At least 13 MGNREGA works have been done since April, including nine individual works, one plantation, two check dams and one village pond. About 1,012 person-days have been created,” said Girish Kumar Singh, gram rozgar sahayak (employment guarantee assistant).

Dikshit added the administration has already spent 70 per cent of their labour budget in the four months alone. “If not now, then when?” he said.

In fact, the district is among the five-best performing districts in terms of employment generated and works undertaken along with Jhansi, Lalitpur, Hamirpur and Sant Kabir Nagar in UP.

Earlier, the funds for material used under MGNREGA would come in two tranches twice a year, creating a huge backlog of dues. A similar problem was with the labour wages, which used to be transferred in a month or two, sometime even later, according to district officials.

“Earlier, payments were delayed both for labour and material. The funds would not be released on time to clear the dues, or would be insufficient to clear all pending dues. Hence, people were unwilling to work under the scheme,” said Lokendra Singh Yadav, additional programme officer, MGNREGA, Jalaun.

This year, however, the government has been proactive in releasing the money and making payments.

“People would earlier work under the scheme and forget about the payment. But it’s different this year. I have received the money for the work I did within a week,” Sahoti said.

Another highlight is the tweak in expenditure on labour to material ratio that has made the scheme a little more flexible.

“We had to maintain a 60: 40 ratio at the village level. But, a June 22 notification allowed us to maintain this ratio at the district level, giving us flexibility in undertaking work,” Dikshit said.

The scheme has been overhauled to rise up to the occasion in other ways as well.

“This time, apart from the works carried over from last year, we decided to start the work before procuring approval from the Gram Panchayats in order to save time,” said Jitendra Kumar Saxena, senior assistant, MGNREGA.

The convergence of MGNREGA with other schemes was also ensured. This meant that MGNREGA workers could work with other departments such as agriculture, irrigation, etc. While this provision always existed under the Act, it was rarely utilised.

“Other departments did not want to utilise the scheme due to the delay in payments. Departments such as irrigation, public works, etc, use a lot of labour and pay workers in cash. Workers cannot wait for six months for payment,” Dikshit said.

However, Dikshit on May 11 said the state government sent a letter to all districts ordering that labour for the departmental works would have to be done through MGNREGA.

Moreover, the state government, on July 11, allowed construction of panchayat buildings and community toilets under MGNREGA.

“These activities were not allowed under MGNREGA earlier. We now have a target of constructing 28,300 panchayat buildings in 71 districts across the state,” Saxena said.

For Sahoti, MGNREGA can’t provide as much as his or his son’s job did in Pune Rs 9,000 a month in total — but it is enough to make ends meet while in the village.

“Unless the virus goes away and something better comes along, I’m not leaving Dhamna. MGNREGA is enough to survive till then,” he said.