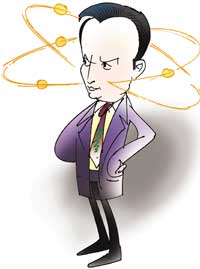 Although the Ambani brothers have parted ways, Anil Ambani and Mukesh Ambani are busy in their pursuit to expand their businesses in the energy sector. While Anil is taking the nuclear route, Mukesh is focused on ethanol. And in both cases, experts fear the companies may not play fair. Besides, existing laws do not allow entry of private players into the nuclear power generation programme yet.

But for the Anil part of the Dhirubhai saga, there is some encouraging news. C N R Rao, head of the scientific advisory council to the prime minister, has sought reforms in existing regulations to allow private sector participation. According to media reports, in his reaction to the approach paper for 11th Five Year Plan, Rao said the rapid expansion of the nuclear power programme would help in improving the situation of the country's energy sector and that would require private sector participation.
The Anil Ambani-controlled Reliance Energy Limited (rel) has proposed to form a joint venture with the Nuclear Power Corporation of India Limited (npcil) to explore its options of generating nuclear power. Media reports state that a nuclear power initiative group under V K Chaturvedi, former chairperson and managing director of npcil, has been set up by rel to explore the feasibility of the plan. rel claims the techno-economic viability of various advanced reactors from the us, France, Germany and Russia has already been carried out. The viability of the indigenous heavy water reactors has also been looked into.

The Department of Atomic Energy (dae) envisages setting up of a total installed nuclear power capacity of 20,000 mw by 2020, which may go up to 40,000 mw, if the Indo-us nuclear deal comes through. Out of this, npcil presently is in a position to set up 10,000 mw on its own and without any budgetary support. npcil officials, however, claim they have not approached any private players. So, it is still unclear whether the remaining power generation will be done with the help of private players' entry into the field or not. "There are several issues that need to be addressed by the government, in case it decides to take a decision on private participation," says S N Ahmad of npcil.

Presently, npcil is one of the two firms permitted by the government to generate nuclear power. The other company is Bharatiya Nabhikiya Bidyut Nigam Limited.
The prospect of private players' entry, especially rel, has not been taken too well by experts. "How much experience does rel have in the nuclear energy sector, which is prone to accidents. No nuclear plant is design proof. Therefore, it is always better for an experienced company to handle such plants, rather than allowing inexperienced companies like Reliance to do so. Besides, in case of an accident who will be responsible for the clean up and compensation? The us government has introduced the Price-Anderson Act. India has no such regulation" says M V Ramana, a nuclear expert at the Centre for Interdisciplinary Studies in Environment and Development, Bangalore. Ramana also expressed concerns on nuclear waste disposal.

The Price-Anderson Nuclear Industries Indemnity Act covers all non-military nuclear facilities that will be constructed in the us till 2026. Its main purpose is to indemnify the industry against claims arising from nuclear incidents while still ensuring compensation coverage for the general public.

According to P R Chari, nuclear energy expert at the Institute of Peace and Conflict Studies, New Delhi, "This is a long procedure. It is easy for the company to announce plans, but there are many procedures to be followed. The International Atomic Energy Agency will have to be brought into picture and the law needs to be amended."

A Gopal Krishnan, former chairperson, Atomic Energy Regulatory Board, Mumbai, says it is too early to pass any judgement on the development. "The biggest question is about the guaranteed lifetime fuel supply to these companies. Because of this, the private players may not ever enter the nuclear energy market," says Krishnan. Cost of the energy produced by such companies also needs to be fixed, says Girish Sant of Prayas, a Pune-based ngo.

npcil concurs with experts' comments. Says Ahmad, "There should be enough safety clauses to ensure continued ownership from responsible private entrepreneurs. There should also be policies for both front and back end technologies, such as provision of fuel supply as well as treatment for the spent fuel. Also, the liability of the utility entering the nuclear field should be specified." rel officials, however, declined to comment. When asked for clarifications, they said "We would like to pass the request this time as the act has not been amended yet."


With rel exploring nuclear power options, Mukesh Ambani's Reliance Industries Limited (ril) has decided to cash in on the cleaner ethanol production. But there are bottlenecks.

Ethanol is rectified spirit dehydrated to yield 99 per cent plus pure alcohol and is blended with petrol. As of now, distilleries (owned mostly by the sugar industry) make ethanol from alcohol derived from molasses -- a byproduct of the sugar manufacturing process. In January 2003, the Union ministry of petroleum and natural gas introduced a programme to blend five per cent ethanol in petrol in nine states and four union territories. However, due to the erratic supply and pricing issues, the programme has petered out.

ril entrance may not help, as it has other plans. Its plants will produce ethanol for its Pune-based facility of monoethylene glycol (meg) -- used to manufacture polyester resins, films and fibres. "No mandatory blending should be introduced till alcohol production is increased in the country," the company said in a meeting in May 2006. Until this meeting, it was assumed that the company would supply ethanol for petrol blending requirements.

The meg facility's annual ethanol requirement is 140 million litres, which the sugar mills in Maharashtra are not able to supply after meeting the needs of potable alcohol (about 120 million litres) and industrial chemical units (about 180 million litres).


ril proposes to set up three sugarcane processing units in Pune, Osmanabad and Kolhapur to manufacture ethanol through direct fermentation of the cane juice. The proposed plants will have the capacity to crush between 10,000-12,000 tonnes of cane daily. Besides sugarcane, the plants will also use other substrates, including sweet sorghum and damaged grain.

Sugar mills produce spirits by fermenting the sucrose remaining in molasses. ril's proposed venture aims at using up the entire sucrose present in the cane (about 13 per cent against two per cent through the molasses route) for fermentation. This will yield roughly six times more ethanol than what sugar mills are now able to produce. But there is confusion regarding whether ril will fall under the ambit of the Sugarcane Control Order, 1966.

Provisions of the Sugarcane Control Order, 1966, apply only in the case of cane used for manufacture of sugar, gur and khandsari. Since ril's proposal involves direct processing of cane for ethanol -- which has never been attempted in the country and finds no mention in the order -- experts fear that the company will be exempt from the provisions of the order. Under the order, there are clauses dealing with fixation of reserved area for factories to source cane, maintenance of 15 km minimum radial distance between neighbouring units and even the application of statutory minimum price for sugarcane.
Maharashtra's sugar lobby fears that ril will use its clout to procure bulk of the sugarcane from farmers. Sources say that Reliance could offer Rs 1,600 per quintal, compared to Rs 1,300 that most co-operatives now pay. "We, being the country's largest sugar producers, want to know what the company proposes," says Prakash Naiknavare, managing director, Maharashtra's Co-operative Sugar Federation. When contacted, ril officials did not respond to the concerns raised against its programme.

Two important expansion plans by the brothers -- while rel's nuclear power generation aspirations will take concrete shape depending on the Indo- us nuclear deal, ril's plans of using ethanol for its own gains only may be held against it.