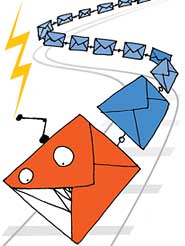 Internet users usually shrug off spam emails--offering everything, from cheap medicines and sex aids to get-rich-quick schemes--as irritants. But new research suggests that they are also damaging to the environment.

More than 80 per cent of the world's email traffic is now spam and the transmission and receipt of such unwanted mail gobbles up 33 billion kilowatt-hours of electricity a year, according to anti-virus software specialist McAfee. That is the equivalent of the electricity used by 2.1 million US homes.

The report follows a study by rival online security firm Symantec that recorded a 192 per cent increase in spam detected across the internet from 2007 to 2008. McAfee estimates greenhouse gases involved in providing electricity to generate, send and then delete such mails is the same as emissions from 3.1million cars.

Software analyst Jeremy Kaplan who lives in the US has questioned the study's methods. "If you had no spam, would you turn off your PCs earlier? So why this hulaballoo over energy waste?" he asked. Or have anti-malware developers hitched on to the climate change bandwagon?