Solar micro-grid at Satjelia, Sundarbans. These micro-grids have lit up a part of the island that has been facing power cuts since Cyclone Amphan.

As a major part of Sundarbans remained mired in darkness even two weeks after Cyclone Amphan hit the deltamarshy island territory, a part of Satjelia island within Gosaba block managed to get some ‘light’— through solar micro-grids.

Solar micro-grids are small, localised grids that supply electricity in the range of 10 to 100 kilowatt using solar power. The micro-grids are not connected to the main grid and can cater to only the local population.

Non-profit WWF-India built six such micro-grids in Satjelia island — of 10 KW each — catering to about 600 families. One more such grid will be installed in the adjoining Kumirmari Island and Gosaba block each soon.

The micro-grids have been handed over to the local user community for day-to-day running.

“Cyclone Amphan uprooted trees, electric poles and snapped wires, but together we made the solar micro-grids up and running within days,” said Amal Mondol, secretary of one of the village energy committees.

“We were provided training to maintain solar grids. It came into use when a few lamp posts carrying the wire from solar plants to households were affected,” said Surojit Roy.

A family has to pay about Rs 50 a month to use three electrical points — generally a tubelight, fan and television. Mobile phones can be charged as well, said Roy.

“We depend more on solar grids as the main one often gets affected by power cuts or low voltage. Their importance is further understood in case of an emergency,” added another. 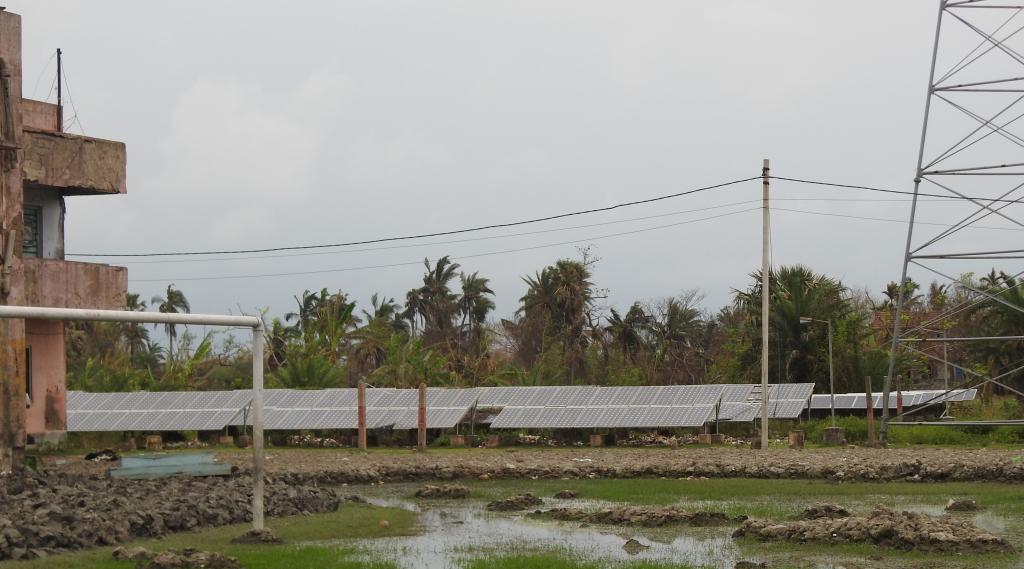 Sen pointed out that most families using micro-grids consume 15 units or less per month. The main grid becomes useful only if a family uses more than 15 units, added Sen.

The cyclone underlined the importance of solar power in extreme weather event-prone areas such as the Sundarbans, according to environmentalist experts. Sundarbans has had one of the highest solar power installations in the world since mid-1990s — about 200,000 off-grid connections. The thrust on solar, however, eventually eroded after the entry of mainstream electrical grid in 2012.

The situation worsened when, under the Integrated Coastal Zone Management (ICZM) project supported by world bank, the main grid reached Sagar island, the highest habited island in Sundarbans along to adjoining islands.

“Sundarbans is a hotbed for climate change and is expected to have more such extreme weather events in the future. In such a situation, the main grid is always likely to be affected. We need to keep focus on solar micro-grids as alternate and supplementary source,” said SP Gon Choudhury, a solar expert who introduced one of world’s biggest solar programmes in Sunderbans in 1994.

Almost all 20 government-run micro-grids have become non-functional since the main grid was installed in different islands. The power department that is supposed to keep a watch has only ignored them altogether, claimed officials.

“We have repeatedly requested power department to retain solar micro-grids and get it linked with the main grid, but they don’t listen,” said a member of the Mousuni Gram Panchayat.

DTE found that the entire micro-grid of Mousuni had been left abandoned at one side of the Panchayat building.

The panchayat pradhan pointed out that one of the major towers linked to the main grid collapsed during the cyclone. The village won’t get electricity for months until it is repaired, they claimed.

“Apart from its obvious utility in extreme weather-prone areas like Sundarbans, the state government invested the money in setting them up giving at least five megawatt of electricity. As now they have been abandoned, the money has gone down the drain,” said a solar power expert.