Houses torn down, electricity poles on roads, a hungry river waiting to devour the remains and tales of fear and loss from the villagers — Deulbari village in Sundarbans painted a post-apocalyptic picture.

On May 25, on the day of Eid and five days after cyclone Amphan ripped through West Bengal, the village wore a dismal look. Celebrating the festival was not on the cards in the face of the damage.

In the village in Kultali block of South Parganas 24 district, 11-year-old Babu Sona desperately searched for his toys and books amid the heaps of mud. He asked his aunt about the mud house that stood there till a week ago. 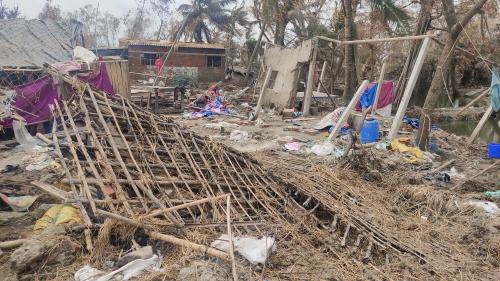 Several houses were destroyed in the cyclone. Photo: Gurvinder Singh

“He has been looking for his belongings. How do we explain that we have lost more than just toys and books?” said Belarani Chapadar (40).

A few metres ahead, Rashida Goldar (60) cooked rice on a mud stove. She had looked forward to celebrating Eid before the cyclone struck. “The cyclone took away everything. I grow vegetables on an acre of agricultural land. But it is now submerged in saline water and the crops are destroyed. We have not witnessed anything like Amphan before.”

Villagers shuddered while talking about the day the cyclone struck. “The black clouds had begun hovering over the sky since May 19 evening. Strong winds blew but we were not as concerned.  The night before the storm was no different — we ate and slept thinking it would be not that big,” said Deboshree Sarda (40), a homemaker. 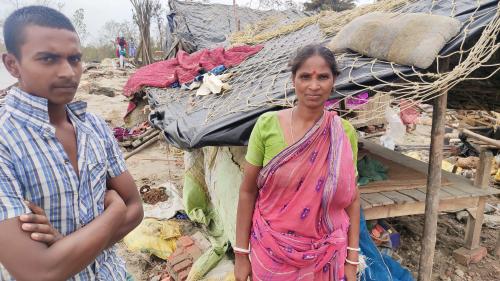 But the villagers were proven wrong. As fierce waves pounded embankments and howling winds pierced through the walls, Sarda and others decided to move to a school that was converted into a relief centre.

Some villagers, however, are spending nights under open sky fearing theft of leftover belongings including broken doors, windows, utensils and other mud-soaked items.

Villagers alleged they did not receive any help from the administration.

“Relief camps have been built but we do not want to go there because they are crammed with people. Besides, our belongings are still here,” said Tapas Kumar, a local Trinamool Congress leader.

Hygiene goes for a toss

Villagers said they have to defecate in the open as toilets were washed away in river Matla. “We are also facing danger of tigers. The forest is only a few metres away,” said Arjun Mondal, a villager.

Meanwhile, agriculture and fishing has been hit as well.

“The lockdown has added to people's woes. The local administration has been providing them with dry ration kits, but they find it difficult to afford secondary items like oil and spices. The loss of property has been huge,” said Amitava Roy, general secretary, Lokamata Rani Rashmoni Mission, a non-profit working for livelihood and environment.

He added that they distributed ration kits to 1,600 people in Kultali and Joynagar blocks.

“Thousands of trees spread around 1,600 hectares have been destroyed. The need of the hour is to plant more mangrove trees and stop illegal cutting of trees as well as sand mining. Mangrove areas outside forest cover are being encroached and converted into fish bheris,” said Santhosha G R, divisional forest officer, South 24 parganas.