Coral reefs in the Asia-Pacific have been deluged with an estimated 11.1 billion pieces of plastic waste, increasing the risk of coral disease more than 20-fold 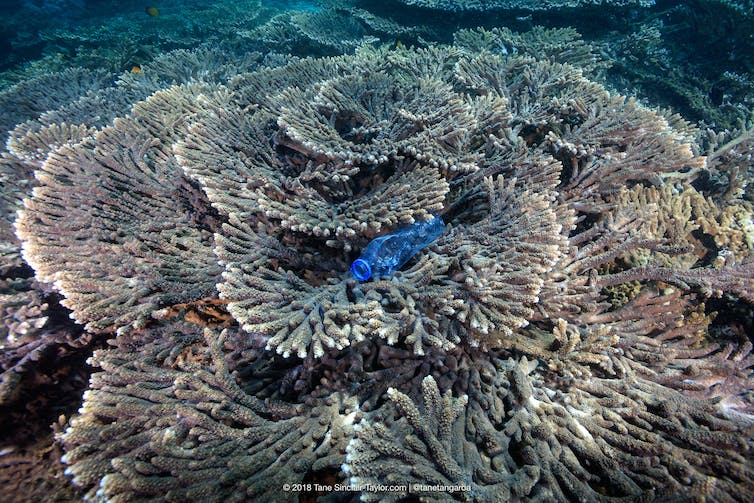 There are more than 11 billion pieces of plastic debris on coral reefs across the Asia-Pacific, according to our new research, which also found that contact with plastic can make corals more than 20 times more susceptible to disease.

In our study, published today in Science, we examined more than 124,000 reef-building corals and found that 89% of corals with trapped plastic had visual signs of disease - a marked increase from the 4% chance of a coral having disease without plastic.

Globally, more than 275 million people live within 30km of coral reefs, relying on them for food, coastal protection, tourism income, and cultural value.

With coral reefs already under pressure from climate change and mass bleaching events, our findings reveal another significant threat to the world’s corals and the ecosystems and livelihoods they support.

Read more: This South Pacific island of rubbish shows why we need to quit our plastic habit

In collaboration with numerous experts and underwater surveyors across Indonesia, Myanmar, Thailand and Australia, we collected data from 159 coral reefs between 2010 and 2014. In so doing, we collected one of the most extensive datasets of coral health in this region and plastic waste levels on coral reefs globally.

There is a huge disparity between global estimates of plastic waste entering the oceans and the amount that washes up on beaches or is found floating on the surface.

Our research provides one of the most comprehensive estimates of plastic waste on the seafloor, and its impact on one of the world’s most important ecosystems. 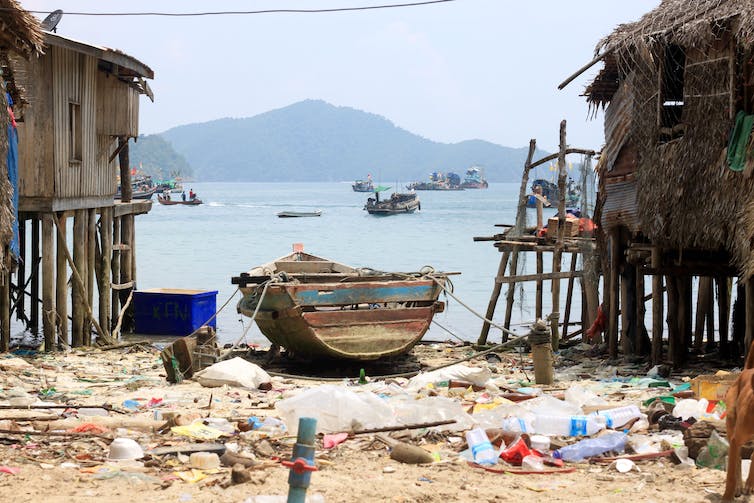 Plastic litter in a fishing village in Myanmar. Kathryn Berry

The number of plastic items entangled on the reefs varied immensely among the different regions we surveyed - with the lowest levels found in Australia and the highest in Indonesia.

An estimated 80% of marine plastic debris originates from land. The variation of plastic we observed on reefs during our surveys corresponded to the estimated levels of plastic litter entering the ocean from the nearest coast. One-third of the reefs we surveyed had no derelict plastic waste, however others had up 26 pieces of plastic debris per 100 square metres.

This increase is set to happen much faster in developing countries than industrialised ones. According to our projections, between 2010 and 2025 the amount of plastic debris on Australian coral reefs will increase by only about 1%, whereas for Myanmar it will almost double.

How can plastic waste cause disease?

Although the mechanisms are not yet clear, the influence of plastic debris on disease development may differ among the three main global diseases we observed to increase when plastic was present.

Plastic debris could also introduce pathogens directly. Polyvinyl chloride (PVC) – a very common plastic used in children’s toys, building materials like pipes, and many other products – have been found carrying a family of bacteria called Rhodobacterales, which are associated with a suite of coral diseases.

Similarly, polypropylene – which is used to make bottle caps and toothbrushes – can be colonised by Vibrio, a potential pathogen linked to a globally devastating group of coral diseases known as white syndromes. 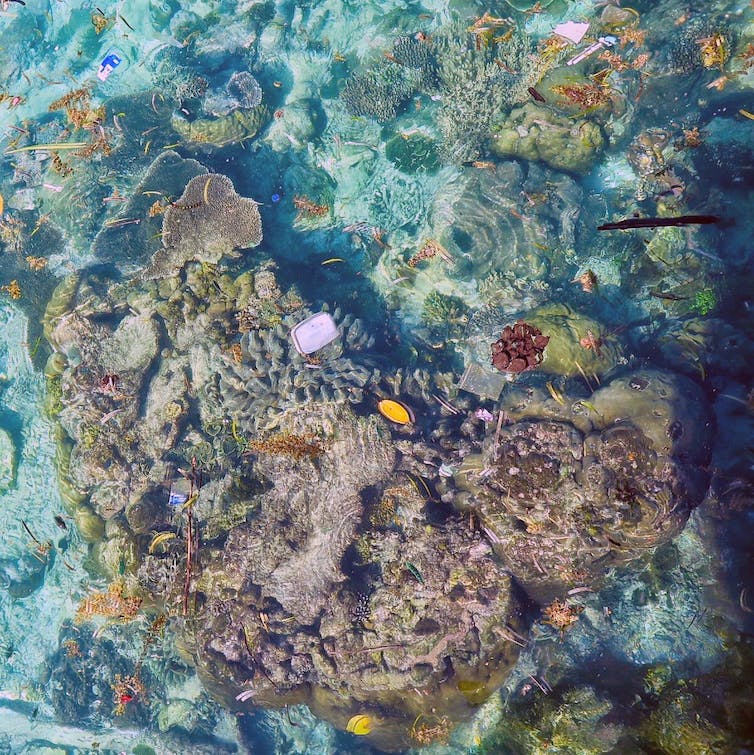 Structurally complex corals are eight times more likely to be affected by plastic, particularly branching and tabular species. This has potentially dire implications for the numerous marine species that shelter under or within these corals, and in turn the fisheries that depend on them.

Read more: Eight million tonnes of plastic are going into the ocean each year

Our study shows that reducing the amount of plastic debris entering the ocean can directly prevent disease and death among corals.

Once corals are already infected, it is logistically difficult to treat the resulting diseases. By far the easiest way to tackle the problem is by reducing the amount of mismanaged plastic on land that finds its way into the ocean.