A study in green: Coaching centre in Bihar gives free classes to poor in exchange for saplings

A coaching institute in Bihar asks students to plant 18 saplings as admission fees to help impart free education to poor students while also conserving the environment.

The green initiative by the coaching institute, which prepares students for competitive examinations, has not only benefited more than 5,000 students from poor families but also improved the green cover in the region.

The institute was founded in Rosera block of Samastipur district in 2008 and has helped plant 110,000 saplings since then.

The saplings, mostly fruit-bearing species, were planted in districts of north Bihar such as Samastipur, Begusarai, Darbhanaga and Khagaria.

The reason behind asking for  each studnt to plant 18 saplings specifically? “One person inhales as much oxygen throughout their life as these 18 plants generate,” said Rajesh Kumar Suman, an environment and climate change activist, who conceived the idea.

“How will the people survive unless they work towards conserving the environment? It’s our collective responsibility to boost greenery and save the environment,” he added. 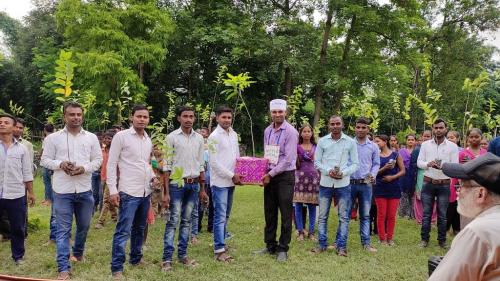 The idea has proved to be a boon for poor students who can’t afford to join prominent coaching classes in Patna and other cities. Around 500 students enrolled in the institute have cleared the competitive examination and got government jobs, Suman shared.

“The plants have helped me get a job in the Income Tax Department in Mumbai. Had it not been  for this institute, I would have been selling spices on the roadside for survival like my father,” said Raushan Kumar.

Severe financial crisis had dashed all of Kumar’s hopes of a better life until the coaching centre gave him a new lease of life, Kumar added.

Another student Amarjeet Das too feels indebted to the institute. “I was told to send selfies with saplings I have planted. I was considered for admission when I reached 18 plants,” said Das who is now a Group D employee with the Indian Railways. His father is a daily-wage labourer.

Students are asked to plant saplings anywhere in the region — either on their own farmlands or on government land if they are landless, he added.

The teachers at the institute are employed elsewhere and provide their service for free to help the poor, said Suman. They conduct classes in the morning and the evening for two hours each.

The main objective behind collecting plants as admission fees is to make the younger generation understand the importance of environmental conservation, he added.

On Sundays when the institute is closed, Suman visits various parts of the state spreading awareness about the importance of planting trees to villagers.