To resolve environmental problems, we need a change in mindset, empirical studies, implementation, monitoring and follow-ups, says Justice Madan B Lokur. Excerpts from his speech at the Anil Agarwal Dialogue recently organised by the Centre for Science and Environment

By Madan B Lokur 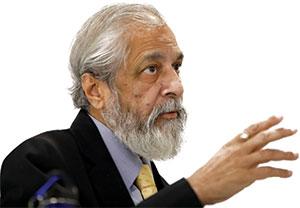 In early 1970s, there was a mathematician in the US who used to also play the piano and sing. One of the songs he composed went: “When you come to New York City, you have to be careful about two things—one, don’t drink the water, and second, don’t breathe the air.” Once you are able to do these things you are pretty safe. Since then things have changed in New York City, but we in India have still not woken up.

One of the environmental challenges we face is how to bring about a change in mindset of people. Indeed, individuals can do something, but support from the State is also vital—Union and state governments, municipalities and so on. I remember my experiences of visiting various courts in central India, Northeast, Chhattisgarh and Jharkhand. Whenever there was no electricity or if it was going to rain, the judge would simply leave the court room saying he cannot work with no electricity and the court would be adjourned for the day.

We tried to introduce computerisation, but without electricity the computers would not work. So we started advocating the use of solar energy. I am sorry to say that many of the chief justices at that time said it was the job of the government. The governments had no interest. In spite of several campaigns and subsidies, no state government actually came forward and said we will help the court. The courts did not go forward to the State. Here, journalists can play a very important role in changing the mindset of people.

The second lesson I learnt during dealing with various environmental issues is that we do not have empirical studies—the effect of air pollution on children’s health or the contribution of stubble burning to smog or the pollution of the Ganga.

I remember as a child we used to get a bottle of Ganga water and were told that this water cannot be contaminated. Today, it is highly contaminated. Yet, no authoritative study has been done.

Whenever a study by an independent institution is released, the government disputes its findings. During the hearing of some of these cases, we were told about the adverse impact of air pollution on children in Chittaranjan Park in Delhi. The reaction was that how can we trust a study done by “foreign agencies, some university and some doctors”. But then no study has been conducted by the Government of India. The government’s strategy works like this: if you do not acknowledge a problem exits, then you are not bound to tackle it.

The third aspect is of monitoring and follow-ups. Though we have provision of social audits in some laws, we do not know whether they are being conducted and are benefiting all sections of the people. Take for instance the Bandhua Mukti Morcha case. In 1984, the Supreme Court took a decision to free large numbers of bonded labourers in Haryana. But these free labourers could not find a job and went back to the same contractors who said: “We were paying you R100 when you left, now we will pay R80.” The labourers had no option and accepted.

Or take the Supreme Court’s ruling in 1997, which laid down the guidelines in the Vishaka case to deal with complaints of sexual harassment in workplace. But it took 15 years for Parliament to enact a law. So implementation and delivery social audits are vanishing from governance structures.

There are many issues that need urgent attention—drought, water scarcity, waste management and plastics. But the judiciary cannot take decisions that the executive has to take. The courts also cannot monitor implementation. When I was in the Delhi High Court, we passed a judgement to curb the use of plastics based on their thickness. But there was no follow-up by the government, and today one can find plastic bags of all thickness size. Health is a fundamental right, but enforcement is a problem. Since consciousness has not been created, our right to clean air and water is getting destroyed.

There are numerous issues that showcase environmental pollution. The Taj Mahal is getting ruined due to air pollution. The number of tourists visiting Taj Mahal is one-tenth the number of visitors visiting Eiffel Tower. Or take our wildlife management. Elephants, for instance, are getting electrocuted, or they are getting run over by trains. The important point is there has to be a resolution to these complex issues. But are we going to do something only when the next accident or crisis occurs?

What is appalling is that funds allocated for various schemes are not even being spent or are being wasted. Money collected through the Compensatory Afforestation Fund Management and Planning Authority (CAMPA), which is about R50,000 crore, have not been utilised. Why?

Of course, there are industry lobbies of all kinds—plastic, mining, automobile and fuel—but we can tackle them only if there is awareness in society. The problem is that many of us are not even aware of our local MLA or councillor so that we can lodge a complaint. A judge from Canada once told me that just like a tiny mosquito can give us sleepless nights, we as ordinary individuals too can make a difference; it is only a question of timing, strategy and how we do it.