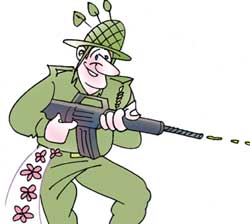 In an effort to reduce battlefield contamination and health risks for the armed forces, the British arms manufacturer BAE Systems, the world's fourth largest defence contractor, is now working on lead-free bullets and a range of environmentally friendly armaments.

According to a company spokesperson, the initiative is in response to a request from the UK's ministry of defence to produce less environmentally hazardous weaponry. As of now, the company has been able to reduce toxicity of bullets. BAE also plans to transform weapons into ploughshares and safely dispose of unused munitions in agricultural land, rather than being detonated. It further aims to manufacture soundproof military vehicles and warheads to cut noise pollution. Critics, however, refuse to accept the company's claims.