There are various forms and faces of pollution today, and believe it or not, light is one of them. Yes, the concept of light pollution is changing our views on astronomy and the environment 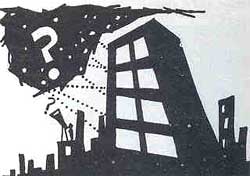 THE post -World War II period witnessed the rapid development of many parts of the world. Burgeoning town apd cityscapes ~parkled witl.I millions of lights. And consequently, the night sky over a typical suburb in the us shines five-10 times brighter than the natural night sky, and that above a city centre may be 25-50 times more brilliant. This brightness does not harm ordinary folks as much as it harms an astronomer's efforts for whom it spells doom in the form of professional blindness' (The Amicus Journa~ Winter '96).

The Mount Wilson ObservatorY in so~thern California, us, has been virtually incapacitated and rendered unfit to make any contribution to astro- nomical research. It has attained this unenviable status due to the growth of the city of Los Angeles. Even observato- ries located in the pristine surroundings of Mauna Kea, Hawaii, us, built 14,000 feet above sea level, are beginning to feel the impact of light pollution. Astronomers who require dark skies to study faint and distant galaxies and quasars (dense gas masses), in order to provide answers to questions on the size, age and fate of the universe are being badly cornered. According to Arthur R Upgren of the department of astronomy at the Wesleyan University, Connecticut, us -who is working on a book on the night sky -laws and regu- lations seeking to control air pollution may be enforced but these do not remedy the disturbances caused by lights. Astronomy is becoming ever more expensive to pursue as better equipment is con~tantly sought to study the universe. The greatest fear dogging these scient~sts is that if cities and their suburbs continue to spread their tenta- cles at the current pace, a time would come when astronomers wo,.lld have to solely rely on the Rubble Space Telescope's images (a satellite-based telescope: capable of producing images of superior quality), provided by the National Aeronautics and Space Administration.

Apart from the loss suffered by the scientific community, the glaring lights also deprive the city-dweller of the joy of gazing at the night sky. Under natural conditions, nearly 2,500 stars ,ould be visible to the naked eye but over mode- rately lit suburbs, one can view only 200-300 stars and in large cities -with radiant skylines -only a tenth of these may be observed.

Not only do bright lights mar the aesthetic beauty of the night sky, they are also an environmental nuisance. The normal behaviour of animals and plants are subject to disturbance from tpese lights. Migratory birds get confused when they spot bright signs on tall buildings or when their radiance gets reflected off low clouds. Birds which sing at dawn, get tricked by streetlights and serenade to a false dawn. Circadian rhythms (rhythmic processes within an organism that occur independently of external synchronising signals} of plants ., also get affected. For instance, deciduous trees near' streetlights do not shed their leaves till very late in the year . These plants and animals may not be fatally affected, but there could be others which are not as lucky under similar conditions.

Apart from aesthetic, ecological, and astronomical reasons, Upgren asserts that illuminating cities as lavishly as they are lit up currently, is a waste of energy. The practice of doing so also relates light to other forms of pollution. Electricity generation is a polluting activity -causing acid rain, smog and emission of greenhouse gases- and the demand for more and more power will only worsen the environment.

There are solutions available to combat light pollution and they lie in the use of energy-efficient lighting, redesigning lighting systems and by passing light pollution ordinances. Many municipalities in the us have turned to these alternatives and gifted their citizens Byron's 'night of cloudless' climes and starry skies'.