Cashing in on green consumers

Britain and USA have followed hard on the heels of the German eco-angel, but, unfortunately, most such schemes continue to remain "green froth". 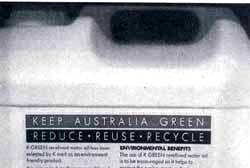 IN THE US, private eco-label schemes, whose environmental monitoring and approval is based on an analysis of the product through its life-cycle, have taken front-seat, because the state-owned US Environmental Protection Agency has remained wary of endorsing a product as ecologically superior. Two such groups are Green Seal and Green Cross, both independent, non-profit organisations.

Green Seal has developed standards for, among others, toilet and face tissues and re-refined motor oil, while Green Cross awards seals largely to recycled items. Leading American environmentalist Ralph Nader's Multinational Monitor, however, warns in a recent issue that the credibility of eco-labels is compromised by these programmes that reflect "what the market is accomplishing rather than what companies could or should attain".

In Britain, The Green Consumer Guide by John Elkington and Julia Haile, which lists green products, has been the messiah of environmental consumerism. Besides this, many companies have awarded themselves green labels as consumers everywhere are willing to pay more for them. Much of it is, however, termed as "green froth". Britain's Friends of the Earth, in fact, awarded a "Green Con" label to Rover car-makers who claimed their cars ran on unleaded, ozone-friendly petrol.