While a section of the sea water had blackened after the spill, nearly half a dozen turtles died near the north Chennai shoreline 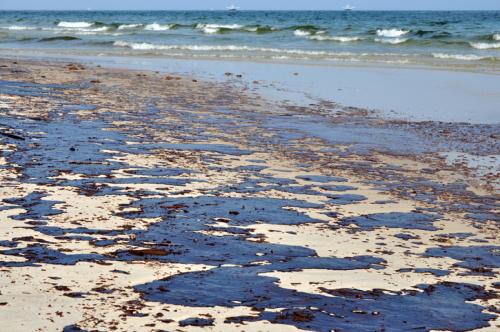 In the wee hours of January 28, two cargo ships collided in the off suburban Ennore near the city of Chennai. The accident took place when ‘M T BW Maple’ of Isle of Man was leaving the Kamarajar port after emptying Liquefied Petroleum Gas (LPG) and M T Dawn, Kanchipuram, loaded with petroleum oil lubricant (POL) was on its way to Ennore.

Four days later, hundreds of Coast Guard men, engineering students and fishermen were seen using their hands to clear the oil spill in the sea. They resorted to manual cleaning after Chennai Metro Water’s super suckers failed to pump out the thickening sludge. On February 2, at least 1,000 volunteers were employed for physically removing blobs of oil deposited along the beaches.

Besides iconic Marina Beach, the oil spill spread some 34 km till Vettuvankeni in the south due to wave action and the southern current.

Loss of marine life and livelihood

According to reports, about 40 tonnes of oil sludge has been removed from the Ramakrishna Nagar beach near Ernavur junction. While a section of the sea water had blackened after the spill, nearly half a dozen turtles died near the north Chennai shoreline.

As experts from the Anna University try to assess the scale of spill and area covered by the help of an unmanned vehicle, environmentalists are worried about long-term consequence of the oil spill.

"The spill will affect oxygen supply to aquatic species. More species will die. But we are not able to assess the loss as we don't have a base line," said Emily Titus, an environmentalist.

Although fishermen claim having suffered due to a dip in business because of rumours of dead fish, the Fisheries Minister tried to allay fears and clarified that it is safe to consume fish samples of the dead fish taken from Ennore, Marina, Thiruvanmiyur—areas where there were reports of oil leak.

According to the environmental activist Nityanand Jayaraman, the oil spill is not only depriving fishermen of their livelihood but also depriving marine flora of sunlight. “When port officials say they will clean up in two days, they mean visible pollution, because this will have a long-term impact as there are toxic effects,” he added.