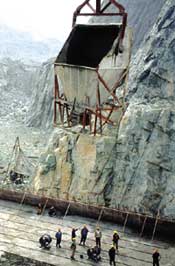 In a commendable move, China has stopped construction work at 30 major projects, a majority of which are power plants, because they failed to follow environmental norms. This was done despite mounting energy crisis in the country. The decision was announced by the State Environmental Protection Administration (sepa) on January 18, 2005. sepa's vice-director Pan Yue said these projects posed serious threats to the environment.

As many as 26 of the affected projects are hydropower plants, thermal-power plants and other power projects. "We must sharpen our teeth. We shall never be rubber stamps. We must take concrete actions," said Pan, adding that sepa will further increase its checks on polluting projects, especially in power generation and iron, steel, cement and aluminium production. The stalled projects also include a cardboard factory and two roads.

The Chinese government had earlier said it had decided to increase controls on investment in power plants, many of which were being built without proper legal approvals. It had even estimated the capacity of such under-construction illegal plants at 120,000 megawatts, 30 times the country's present power generating capacity.

Three of the projects that faced the axe are under the Three Gorges Project Development Corp, the company constructing the Three Gorges Dam on the Yangtze River -- the world's largest hydropower project. Two were auxiliary power facilities connected with the dam. The third was on the Jinshajiang River and was part of the Xiluodu Dam, which is touted as the "second Three Gorges.