A US appeals court ruled it could forward the North American Free Trade Agreement to Congress without an environmental impact statement. 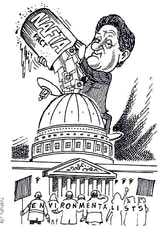 A US APPEALS court has ruled that the North American Free Trade Agreement (NAFTA) can be forwarded to Congress without an environmental impact statement, even as a power plant near the border fuelled a row about environmental damage.

The US court agreed with the Clinton administration that private groups could not compel the government to prepare such a statement on NAFTA, as the agreement was a presidential measure. The judges said NAFTA has yet to be sent to Congress and the side agreement on environment "may well change the dimensions of the conflict over potential environmental damage".

The ruling came even as ecologists alleged toxic fumes, containing sulphur dioxide, from a power plant in Mexico, 32 km from the border, could even affect the Grand Canyon in Arizona, 1,000 km away.

Though NAFTA must still battle for survival in Congress, the task will be made easier by the heightened division among environmentalists. Grassroots organisations such as Friends of the Earth say it will create a polluters' paradise in Mexico and degrade USA. Other groups such as the National Wildlife Federation say it all but guarantees a cleaner western hemisphere.